The liquid Tiberium bomb (also known as liquid-T, or Ichor-LQ to the Scrin) was developed during the Third Tiberium War by the Brotherhood of Nod and later, the Global Defense Initiative. It is the most destructive weapon ever created, ten times more powerful than a two-hundred Megaton thermonuclear warhead.

A liquid Tiberium explosion - highly destructive in itself - will also detonate any Tiberium in the nearby area. This will cause a chain reaction which can be enough to wipe out entire countries or regions. After detonation, a field of Tiberium Riparius (green Tiberium) will be left behind.

Tiberium in its liquid form is highly unstable and has a very high energy density yield. Its potential usages were soon realised by both GDI and Nod, and both sides began researching the possible applications of liquid Tiberium.

The original technology behind the liquid Tiberium bomb is (possibly) Nod's World Altering Missile, developed in secret by Kane to "complete the divination" on Earth. Kane secretly had other plans as the World Altering Missile would have an impact not too dissimilar with a liquid-T Bomb, creating a blast so great that Scrin would be alerted to its blast and commence their operations on Earth, a role fulfilled by the massive power of the Liquid Tiberum Bomb. CABAL was intended (in secret) to deal with the Scrin afterward, as being an AI, it is immune to the Tiberium "divination". GDI gained the first glance of the technology from the World Altering Missile and began their research on the subject in secret.

GDI research into the use of liquid Tiberium in weapons began after the Second Tiberium War. GDI had a large research facility in the Australian Outback in the early 2030s. The head of the facility was renowned scientist Dr. James de Groot. From the beginning, GDI efforts to tame the destructive potential of liquid Tiberium was plagued with setbacks and accidents, which resulted in over two dozen deaths over time. Because of the lack of progress and loss of lives, the secret project became increasingly unpopular within the GDI administration. The final straw came in 2034 when Black Hand Purifiers descended upon the facility and destroyed it, exposing its existence to the public and covering much of Australia in Tiberium fallout. Humiliated and faced with an angry and disillusioned public, GDI abandoned the program.

Nod carried on the research from GDI, at labs in the Amazon in Brazil and in Casabad in Egypt. Nod's messianic leader, Kane, wanted to detonate a Liquid Tiberium Bomb to alert the Scrin - an alien race - to the presence of Tiberium on Earth and provoke a Scrin invasion, a situation which could be exploited by the Brotherhood. In 2047, Nod finally managed to develop a Liquid Tiberium Bomb, but could not figure out a way to detonate it. 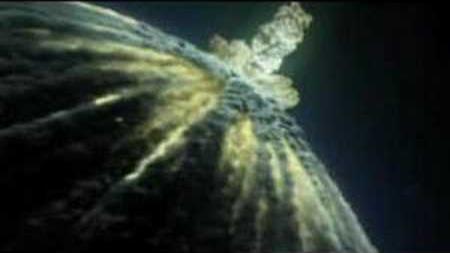 When the Third Tiberium War broke out, the Bomb was in the final stages of being assembled at the lab in Brazil. GDI learned of Nod's liquid-T Bomb when they captured the Nod stronghold of Casabad, Egypt. After being briefed by Alphonse Giraud on the potential destructiveness of the Bomb, General Jack Granger sent GDI forces to Brazil to capture or destroy the second lab.

When a Nod commander repelled the GDI assault on the lab and smuggled the Bomb out of Brazil, GDI decided to shoot down the transport plane carrying the Bomb headed for the main Nod base at Temple Prime in Sarajevo, Bosnia and Herzegovina. The bomb was shot down over Slovenia. Luckily for Nod and the local population, the bomb was undamaged and the Nod commander managed to evacuate it out of the area and to Sarajevo. GDI then decided to lay siege to Temple Prime itself. Against General Jack Granger's wishes, GDI used an ion cannon to destroy Temple Prime. The blast was enough to detonate the Liquid Tiberium bomb stored inside the Temple, producing a massive Tiberium explosion which, through a chain reaction, covered the entire Eastern Mediterranean in Tiberium fallout. The explosion alerted the Scrin, and soon after they launched an invasion of Earth, just as Kane had planned.

When Redmond Boyle became Director of GDI, he ordered the resumption of GDI's Liquid Tiberium research. After the disaster at Temple Prime, GDI developed its own Liquid Tiberium Bomb from research and parts taken from Nod. As Earth came under Scrin onslaught, the usage of the liquid Tiberium Bomb against the Scrin in the Italian Red Zone became an intensely-debated issue. General Granger vehemently opposed the use of the bomb, out of GDI's anti-Tiberium principles and due to the certainty of massive collateral damage. Director Boyle dismissed these concerns from his "political enemy", saying that GDI must do whatever is necessary to win the war.

In the end, the choice was given to the GDI commander at the Battle of Ground Zero. The Commander, faced with overwhelming odds, was authorized to use the Bomb to destroy the Scrin Relay Node and the Nod base in the area.

If used, the liquid Tiberium bomb will end the war with the cost of the deaths of all sides in the battle and 25 million civilians, while the Commander becomes GDI's top general following the resignation of General Granger.

If the bomb was not used, General Granger congratulates the commander and he is called a hero. He also explains the resignation of Boyle for war crimes, since he authorized the usage of such a dangerous weapon.

Currently (as of 2052), it is not known how many Liquid Tiberium bombs, if any, exist. Nod and GDI certainly have the knowledge to create them, and GDI may still have a few workable bombs in its arsenal. However, if the bomb commissioned by Boyle was not used, GDI would have likely decommissioned any remaining bombs in light of future incidents.

The liquid tiberium bomb is similar but has a wider blast radius and more destructive than a nuclear blast. If used once it cannot be used again. Also it can destroy anything in one blast including heavily armored buildings such as the Temple of Nod, the Rift Generator and any Conyards.

Retrieved from "https://cnc.fandom.com/wiki/Liquid_Tiberium_bomb?oldid=245565"
Community content is available under CC-BY-SA unless otherwise noted.