The Szakolczay-made 66mm rocket launcher is a perfect choice for those seeking a compact antiarmour package. A six-round magazine allows for rapid reloading and gives the weapon considerable firepower.

Wielded by rocket soldiers of both sides as well as Gunner in multiplayer games, the rocket launcher is a potent anti-tank weapon in multiplayer, though less effective than the Volt auto rifle or Portable ion cannon. Faster vehicles can easily dodge the rockets, however.

In singleplayer, it's the best anti-tank weapon, which can take out most vehicles in three shots and CH-46 Sea Knights in just one, making them crash and burn in spectacular explosions. 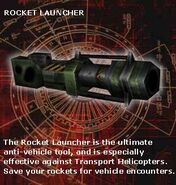 Retrieved from "https://cnc.fandom.com/wiki/Locust_rocket_launcher?oldid=150044"
Community content is available under CC-BY-SA unless otherwise noted.