Colonel Louise James is a GDI career soldier appearing during the course of Tiberian Twilight's campaign.

Daughter of a decorated First Tiberium War veteran, Louise James grew up on the frontlines, distinguishing herself during the third war. By 2047 she was a loving wife and mother, however, she lost her family to the attacking Scrin. She blames Nod and Kane for their deaths (as they deliberately attracted the aliens).[1] She served under General Raven between 2052 and 2062, fighting Nod forces worldwide. [2]

Forced to cooperate with Kane in the wake of the 2062 alliance, she is understandably resentful towards him and bides her time, planning to kill him the moment he steps out of line.[1]

She appeared in game with a modified zone suit unique to her. She had jump jets, and two guns. She could only hold one either a rapid fire missile launcher or a sniper laser. The laser took about 5 seconds with a red targeting laser on the target before the targeting laser dissapeared for .5 seconds and a powerful laser fires that can one shot almost anything in the game.

The player begins his service on GST Tzadik under the command of Col. James. He completes three introductory missions for her before presented with a choice by Kane. Siding with James opens up the GDI campaign, whereas Kane's opens the Nod campaign. The story of Col. James remains generally the same between the campaigns, with a few minor differences in the Nod campaign, detailed below.

After siding with James, Commander Parker becomes her Second-In-Command. Col. James assigns missions to the Commander to further determine what are Kane's mad plans. After a battle at the Arctic Hub, James and her crew on board the Tzadik were shot down by Nod forces in Tin City. Even though they succeed in escaping Nod, GDI still cooperates with Kane. James explains to General Secretary Evelyn Rios (whom she considers a traitor) and General Wesley Riggs that their "Nod ally" is using the TCN to bring back the Scrin. After been dismissed by General Riggs, Col. James declares them unfit for duty and enacts martial law.

A coup immediately follows as James orders the Fleet to head for New Adana in order to capture both Rios and Riggs. Although New Adana falls, GDI Spec Ops squad led by General Riggs boards the GST and captures Col. James and her officers. She is then locked away, awaiting trial. Before it comes to pass, however, the crew of the Tzadik (sans James who somehow escaped earlier) is secretly released by Agent Duquette, with a little help from a GDI infantry squad, and sent to battle Kane at the Scrin Tower.

Col. James first tries a plan of her own. She shoots Kane during his speech at Threshold 19, but could not confirm the kill. A battle at the Scrin Tower for control of the TCN immediately follows.

Kane addresses the Commander and shows him that Col James knew everything about the incident that killed his wife, and had not told him the whole story. Apparently, Col James knew that friendly fire killed Lilly but decided not to tell the Commander so his rage against Nod would be left intact.

However, James suddenly appears and opens fire on Kane and then shoots the Commander fearing that his optical implant will activate the Portal, thus bringing back the Scrin. Before the coup de grace is delivered, Kane appears once more and subdues her. Her off-screen fate makes it clear Kane took care of her.

If the Commander sides with Kane, she becomes a foe. She is very resourceful and remorseless, going as far as striking a deal with Gideon - in exchange for Kane's death, Nod will become peaceful. She proves to be a major hindrance throughout the missions, even after the GST command ship is shot down by an attack made by Nod Sister Chavra and her strike team. She is primarily responsible for bringing out the experimental Arcus bomber in a final effort. It seems that she and General Riggs reconciled since the two of them are seen battling side by side against Nod. James' forces are victorious and she and the Commander enter the Tower.

Inside the Scrin Tower, mistaking the Commander for Kane, she fatally wounds him, after wondering how to stop the portal to prevent the return of the Scrin. She prepares for the final blow, but is promptly strangled by Kane, who shows her the mistakes of her ways. 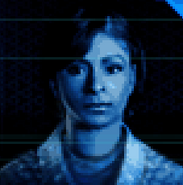 In game
Add an image to this gallery

Retrieved from "https://cnc.fandom.com/wiki/Louise_James?oldid=220729"
Community content is available under CC-BY-SA unless otherwise noted.