Lydia Winters is an Allied commander who appears in the Command & Conquer: Red Alert 3: Uprising.

Ms. Winters is the architect of the Allied global defense network (e.g. the Athena Cannon), instrumental to the victory over Japan and the Soviet Union. This has earned her the right to take on new responsibilities in a more direct role, a post she's all too happy to take.

She first appears in "King of the Monsters", where is on the island along with the Commander and Nikolai Moskvin. Also on the island was a Shogun Executioner and she says that "thing" better not go near her base and asks if her opponents don't mind distracting it for her.

During "Cat Fight" she is in a free for all against the Commander, Takara Sato and Vera Belova. After hearing Sato telling them to leave, Lydia responds by saying that she cannot do that and mocks Takara by asking her if her uniform was really military issue.

Later, in "Athena's Wrath", she informs the Commander that he appears as an intelligent individual and asks why should he face her as she is going to win the battle. After defeating her, she tells the Commander that his efforts were not bad though the execution of it was sloppy. However, she admits that it worked against her.

In "Your Gold Mine Has Collapsed", she was the Allied commander in charge of maintaining a hold on the island. After introducing herself to the Commander, she informed him that the limited resources available meant only one of them could remain on the island. After being defeated, she states that the Commander is apparently brighter than he looks and admits defeat stating that he can claim the island as its his win.

In "S.H.R.I.N.K Zone", she fights alone against the Commander. At the start of the mission, she asks him/her if they know how to use the more advanced weapons but later says that they will soon find out. When defeated, she says that it was an interesting challenge but that the Commander had a clear advantage over her.

At the time of "Chrono You Didn't", she tells the Commander that its good that they still have some fighting spirit as she is chronosphering her forces in every direction. After the destruction of all three of her chronospheres, she shakes her head stating that by her calculation, the Commander's victory was improbable.

During "Future Warfare", she appears alongside both Commanders Douglas Hill and Giles Price in combating the Commander. After Commander Hill's message, she gives the option to the Commander of surrendering thus saving them all the time and trouble of defeating him/her. Upon defeat, she seductively asks the commander if he's looking for any new recruits. 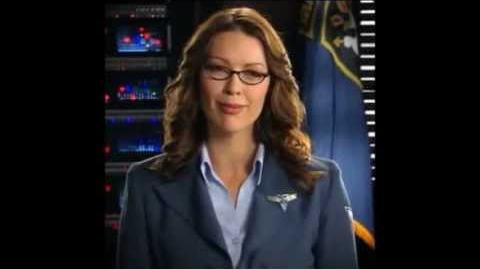