The Machine Gun Squad is a GDI infantry unit in Command & Conquer: Rivals.

The GDI Machine Gun Squad is a man-portable heavy machine gun operated by a crew of three. Although extremely slow and unable to attack on the move, they have great firepower and durability when deployed, making them ideal for harvester defense and occupying strategic locations.

The Machine Gun Squad is a slow moving infantry unit that is very vulnerable while en route and setting up, but once settled, has increased health and long attack range. Although their raw firepower is not that great, their ability to shoot over friendly units gives the sustained chip damage that will wear down ground units quickly. On their own MGs can't survive even ground based anti-infantry units, therefore they must be supported.

One option is to accompany MGs with the Missile squad since both can stand up to early game threats. War dogs can give a better early ground defense since they are disposable and hard to destroy. They can block effectively while MG is dealing damage from a safe distance. To counter air threats, Slingshot can deal with early game threats.

MGs are most effective on maps where there is a single strategic point to defend.

Even though MGs are relatively cheap, they are hard to replace once removed, since they are slow to move, take long to deploy, are vulnerable while doing so. These circumstances make it paramount to keep them alive as long as possible and to have a plan B if the MG nest is destroyed.

The greatest threat to MGs are Venoms, Razorbacks and Drone swarms, since these units are available in the early game and can survive against Missile squad protection. Even scouting Militants or Cyberwheels can easily destroy MGs. In the middle game, the Drill pod is a headache since it can be deployed right next to the MG squad, in addition, Catalyst missiles and Ion cannons can't be avoided.

In the late game most heavy units can tank its damage, therefore it is in the interest of the commander to finish the match as soon as possible.

The MG squad does not follow the usual squad mechanics — it doesn't lose damage output as it loses health, and it can be healed up to full strength. This makes MG significantly benefit from the Repair drone. 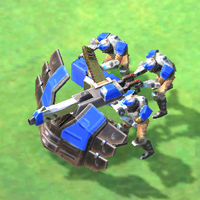 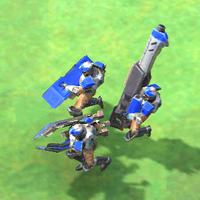 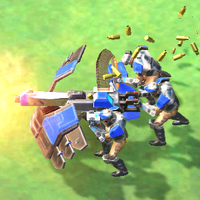 Retrieved from "https://cnc.fandom.com/wiki/Machine_Gun_Squad_(Rivals)?oldid=240817"
Community content is available under CC-BY-SA unless otherwise noted.