Maja was a female Priestess who worked for the Brotherhood of Nod after the Third Tiberium War.

Unknown to many, she was also an informant who worked with Michael McNeil. She later traveled to the Mobius Research Station outside the last Scrin Threshold where she briefed GDI Commando Ricardo Vega about Nod placements consisting of two battalions surrounding the structure. She also informed him of the danger he faced as Nod faced that the area was sacred but did mention that she would do her best to guide him on his mission.

She was impressed with Vega's knowledge of her peoples tradition though she was distrusted by Tera Gallagher. 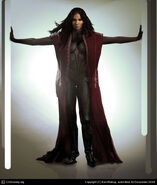 Another piece of concept art

Wireframe
Add an image to this gallery
Retrieved from "https://cnc.fandom.com/wiki/Maja?oldid=101094"
Community content is available under CC-BY-SA unless otherwise noted.