The Mammoth Mk. III of the Global Defense Initiative is the most powerful offensive tank in Tiberium Alliances and it is the second most expensive unit to research in the GDI arsenal (first being the Kodiak anti-structural aircraft).

While the Mammoth tank is very effective against nearly every ground units and structures, it's best to use it against vehicles as its main role is being a heavy anti-vehicle tank. The Mammoth is the slowest ground vehicle in the GDI arsenal. 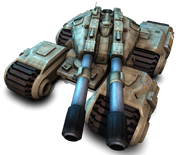 Research Icon
Add an image to this gallery

Retrieved from "https://cnc.fandom.com/wiki/Mammoth_(Tiberium_Alliances)?oldid=216752"
Community content is available under CC-BY-SA unless otherwise noted.