Tech Center (except for GDI)

Can be only built once at a time

The Mammoth Armored Reclamation Vehicle (MARV) was an ultra-heavy tank/Tiberium-processor hybrid designed by GDI Zone Operations Command (ZOCOM) during the Third Tiberium War. The Mammoth Mk. III-based design was used to support ZOCOM's Tiberium-abatement operations in red zones which were traditionally vulnerable to Nod and separatist mutant attacks. The MARV was extremely powerful and versatile, and it was capable of defeating most ground units in an one-to-one battle (any, if garrisoned by four Zone Troopers/Raiders). It somewhat filled the role of the old Mammoth Mk. II as the ultra heavy assault unit in the GDI arsenal.

Like the Nod Redeemer and the Scrin Eradicator Hexapod, the MARV must be built from its own specialized construction building - the Reclamator Hub - and commanders were only authorized to deploy one MARV at a time to the battlefield.

Born from the same initiative that led to the creation of ZOCOM, the Mammoth Armored Reclamation Vehicle, or MARV, combines the near-impregnable armor and massive firepower of GDI's most potent tank designs with a full-capacity Tiberium processing facility. Tasked with single-handedly abating Tiberium in Red Zones currently held by Nod or mutant separatist forces, the MARV was designed with battlefield flexibility in mind. With a powerful main gun and four upgradeable hardpoints, the vehicle can adapt to changing combat situations, take on any mix of enemy forces, and turn the tide of battle in a matter of minutes.

Using a front-mounted scanning and collection system, the MARV can gather, process, and convert terrestrial Tiberium to usable resources in a matter of minutes. Its tri-barreled sonic cannon, which fires a large area-of-effect sonic shell, is equally as effective against unexpected uprisings as it is at breaking down massive Tiberium deposits for reclamation.

Nod first encountered the MARV after the opening offensive on the Blue Zones during the Third Tiberium War. Several scout patrols were eliminated after encountering ZOCOM MARV's in the African Red Zone. One patrol managed to transmit a warning before being destroyed. The projected result of ZOCOM's reinforcement was the loss of Nod influence in the Red Zone.

Abbess Alexa Kovacs deployed LEGION into the Red Zone to locate and capture the Reclamator Hub where the MARV was maintained. An analysis of MARV wreckage and captured data allowed the Brotherhood to complete its own Epic Unit, the Redeemer, during the battle. Designs for the Redeemer and its production facility, the Redeemer Engineering Facility, were transferred to LEGION for immediate field testing. Ultimately, three MARVs were destroyed during the ferocious battle.

MARVs were not known to operate after the Third Tiberium War as the Tiberium crystal mutated once more, making it unharvestable or even able to be broken down. They were replaced by the new Mastodon Walker in terms of brute firepower during the Fourth Tiberium War.

The MARV produces much less credits per Tiberium patch than a regular Harvester: 115 credits per green Tiberium patch, and 230 per blue Tiberium patch, compared to 350 for green Tiberium and 700 for blue Tiberium. However, the MARV does not need to offload at a Tiberium refinery; it instantly converts into credits any Tiberium patch it moves over as long as one has enough storage. It is also extremly slow, due to its heavy armor, but even with all those downsides, it is very handy to help turn the tide of battle, put the finishing touches on an assault, to be used as a tank to absorb damage for the rest of your army or be used for just plain overkill.

While Steel Talons and ZOCOM MARVs require a Tech Center to be built, the vanilla GDI one does not.

Among the epic units, the MARV has the heaviest armour, the slowest speed, and has the most number of garrison points, and so has unparalleled firepower on land (Redeemer = 2, Eradicator = 3) .

In a one-on-one fight, ignoring garrisons and veterancy, the MARV loses to any other Epic unit, but garrisoning it stands a higher chance, and if garrisoned by four Zone Troopers/Raiders, MARV is the strongest land unit, beating no matter how garrisoned Redeemer or Hexapod is in combat, however requires an enormous investment amounting to 10,200 credits all into one unit. The number of garrisons and variety of options also makes it the most flexible. It is the only Epic unit that can fire while on the move, giving it a significant tactical advantage. It is also the only Epic unit to feature directional armor (that is, it's frontal armor is stronger than the armor elsewhere on its body, with the rear being the weakest point); this, coupled with the use of the "reverse move" command, can help a careful commander save a MARV that may have waded into a conflict it cannot handle, although it can also be exploited by a wily opponent. The main sonic weapon deals heavy splash damage, making the MARV slightly more effective against groups of clustered infantry than the other epic units. The MARV is capable of crushing any other non-epic unit, meaning that it can literally drive over huge amounts of enemy forces and crush them, as long as it's not destroyed while moving to them.

The MARV may be used to hamper an opponent's economy by quickly depleting Tiberium fields convenient to the enemy.

Clues found in the MARV's concept art and in-game model imply the vehicle's cannons were originally supposed to rotate after each shot so that only the uppermost barrel was the one firing, however this graphical feature is not present in the final game.

A MARV garrisoned with Rifleman squads

A MARV garrisoned with Missile squads

A MARV garrisoned with Engineers or Combat Engineers

A MARV garrisoned with Grenadier or Zone Raider squads

A MARV garrisoned with Sniper teams

Nod surveillance log of first encounter with the MARV

Rolling out from the Reclamator Hub

3D model in Nod's database
Add an image to this gallery 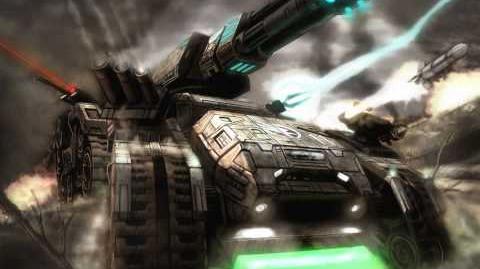 Retrieved from "https://cnc.fandom.com/wiki/Mammoth_Armored_Reclamation_Vehicle?oldid=244206"
Community content is available under CC-BY-SA unless otherwise noted.