The Mammoth Mk. III[2] (GDI designation: Mammoth 27) is a GDI heavy assault tank that entered service prior to the Third Tiberium War. At the time it replaced the Mammoth Mk. II walker as GDI's premier land assault unit.

Following the Second Tiberium War, GDI concluded that the technology present did not make widespread use or deployment of walkers an optimal solution. The Mammoth Mk. II superheavy walker was slated to be supplanted by the less expensive and equally durable, but less powerful Mammoth Mk. III heavy tank.

This decision was not without its detractors; Colonel Nick Parker opposed the discontinuation of the massive walker and claimed it was the result of "bureaucratic penny pinching" rather than an appreciation of military realities (it turned out that GDI research found walker legs highly vulnerable to sabotage, which had a lot to do with the decision).

During the Third Tiberium War the Mammoth Mk. III was first deployed in Alexandria, where they proved very efficient in destroying Nod's primary African port and base. The Mammoth would later serve in all remaining battles throughout the war including at Sarajevo, New Eden and the Italian Red Zone.

Although these tanks still served in some capacity as late as 2074 (in BZ-1, Paris)[4], they were largely replaced by next generation Mammoth Tanks and their revived walker brother by 2077.

The Mammoth Tank is designed with long-range operations in harsh environments in mind. For this purpose, it is covered in thick, hexagonal armor.[5] The vehicle is designed to incorporate an organic engineer crew to maintain it in the field - they could independently repair the vehicle to 50% effectiveness (nonfunctional in-game).[5]

The Mammoth Tank's firepower and armor were so impressive to the extent that it can destroy three Predator tanks in combat and still have around half its health left over. Against Avatars and Annihilator Tripods, the Mammoth Tank will generally emerge victorious.

It has a distinctive H shape that comes from General Combat Hull Inc.'s patented quad-drive tread system - a pattern which was originally developed for the Bull tank.

The tank is equipped with dual 150mm cannons on the turret (which can be later upgraded to railguns) and comes, in the vein of earlier models, with dual 4.75-inch missile pods attached at the sides - specially designed to attack infantry and aircraft. [5]

An upgrade replacing the cannons with railguns became available prior to the Third Tiberium War, and the vehicles would continue to be retrofitted right through to the end of that conflict.

Additional upgrade options for Mammoth Mk. IIIs were fielded by the Steel Talons experimental combat technology division in the form of Railgun Accelerators—which enabled Railgun-equipped Mammoths to deliver unparalleled amounts of firepower for a short duration, and Adaptive Armor: which adds superior resilience and EMP-immunity. Steel Talons Mammoth Tanks outfitted with Adaptive armor were especially known for their extreme resilience and durability, even by GDI's own standards.

The G-150 Mammoth variant carried an infantry squad. G-150's were employed by the 22nd Infantry Division during the Third Tiberium War.

While not strictly a variant, the Mammoth Armored Reclamation Vehicle was a Super-heavy anti-tiberium tank whose structural design is primarily derived from the Mammoth Mk. III.

The Mammoth Tank is one of the most expensive units in GDI's arsenal (in the vanilla game it is the 2nd most expensive unit), but it is also considered to be GDI's ace in the hole in the late game; it has very heavy armor and very high firepower, and is the ultimate expression of GDI's attitude towards armor superiority.

Compared to the Scrin Annihilator Tripod, or the Nod Avatar Warmech, the Mammoth Tank is the slowest but also the most durable. In terms of firepower and general performance, it is the most cost-efficient for armored battles—being able to match and even overpower its equivalents in a head-on engagement. While its primary weapons are dual cannons, it also classically features dual missile launchers that each can fire a salvo of two missiles at any type of target, giving the Mammoth the ability to attack aircraft and assisting it in attacking anything else.

Mammoths excel at destroying enemy ground vehicles. Almost any type of enemy vehicle aside from other factions' equivalents are guaranteed not to last long in a direct confrontation with a Mammoth unless they have numerical superiority. Several Mammoths attacking and charging forward at once can quickly overwhelm most types of targets and can cut through the defenses of all but the most heavily guarded bases, then proceed to destroy the buildings within.

The sheer size of the Mammoth Tank allows it to aggressively plow through most types of ground units; it can crush anything that isn't a walker-type vehicle, another Mammoth Tank, or a commando-type unit. However, it has weakened side armor, rear armor, and turns slowly. Charging through enemy armor and infantry is not always a good idea since it may take more damage than if it simply stands still and keeps firing. Due to its slow speed it isn't difficult for enemies to evade being crushed, or to simply flank the vehicle, exposing the vulnerable side armor, either. Careful management or exploitation of this weakness is important, depending on if a player is fighting against or fighting with Mammoth tanks.

Mammoth tanks are vulnerable to aircraft; because their missile launchers reload slowly, they are not reliable at bringing down groups of most types of aircraft other than Nod Venoms or Scrin Stormriders; so commanders need to escort them with more reliable anti-air units such as Pitbulls, Slingshots, or Guardian APCs if they expect the Mammoth to receive fire from enemy aircraft. Still, the launchers are helpful in allowing the Mammoth to defend itself, especially against clumped aircraft as they do area-effect damage.

Traditionally, like most tanks, the Mammoth is vulnerable to infantry attacks. It is especially vulnerable because it is slow moving, so it cannot hope to outrun infantry if it is in danger. Upgrading its cannons to Railguns helps it fight infantry more manageably, but still not effectively (especially against cannon-resistant Zone Troopers or Black Hand), so it may require some anti-infantry escorts. Its missile launchers are also far more effective against infantry than its unupgraded twin cannons are due to dealing area-effect damage, but the slow fire rate of the launchers plus their incapability to accurately hit moving infantry still makes them an unreliable defense.

Another key weakness of Mammoth Tanks is the combination of their slow speed, vast size and short attack range (compared to other Tier 3 units)—which renders them highly vulnerable as easy targets to be destroyed or at least damaged by enemy artillery. Small groups of Juggernauts or Specters, masses of Beam Cannons, and even harassment from Annihilator Tripods are all effective ways of countering Mammoth Tank attacks. If a Nod commander charges several EMP coil-upgraded Raider Buggies into a mass of Mammoth Tanks then shuts them down, they can be picked off before they can come back online.

To counter the slow speed of the Mammoth, which naturally leads to it often being worn down from harssing attacks as it moves across the battlefield, GDI commanders often supplement them with Battle Bases which can repair them in the field and provide some extra anti-air cover.

In Kane's Wrath, the Steel Talons subfaction has access to the Adaptive Armor upgrade, which confers EMP immunity and outstanding damage resistance—allowing their Mammoth Tanks to absorb exceptionally higher levels of damage and better survive concentrated attacks (such as airstrikes or even Superweapons), since it can sacrifice some of its firepower for more armor when needed.

The Mammoth tank was modelled by Mike Colonnese.

Mammoths Mk. II and Mk. III wreckages
Add an image to this gallery 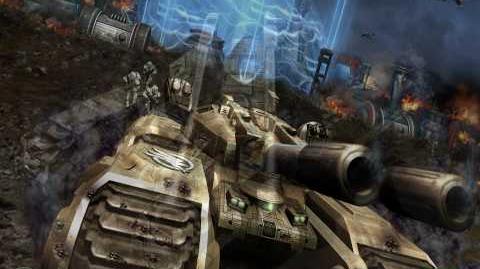 The Mammoth Mk. III appears in Tiberium Wars, Kane's Wrath and Tiberian Twilight motion comic. In the latter, it appears as wreckage in the Paris invasion scene.

Retrieved from "https://cnc.fandom.com/wiki/Mammoth_Mk._III?oldid=237503"
Community content is available under CC-BY-SA unless otherwise noted.