The Mammoth tank is a Soviet super heavy tank appearing in Red Alert 1.

Acting on the orders of Joseph Stalin, Soviet engineers created the Mammoth Tank, the heaviest tank ever produced in that conflict, to counter the increasing threat of the Allies' latest tank. Mounting twin 120mm cannons complimented by two Mammoth Tusk missile pods and extremely heavy armour, it is truly the last word in conventional vehicle technology. The enormous chassis is supported by a pair of treads on each side. The turret is plugged into the hull with a relatively thin screw-like extension. There is no large turret well and the turret is a self-contained module with no crew transfer being possible between the turret and hull. The turret aiming and rotation mechanism is automated so much as it aim directly to its intended target swiftly.

The vehicle is equipped to carry out limited battlefield repairs independently. In addition to being a threat to ground targets the tank's missiles could also engage aircraft.

The Mammoth chassis was used for an experimental Soviet super tank project by Doctor Demitri. The tanks were nearly unstoppable but when Doctor Demitri defected he accidentally caused the tanks to obliterate everything in their path, until the Allies managed to deactivate them. The Soviets also used the Mammoth Chassis for the Mutually-Assured Destruction Tank, or MAD tank, a unique seismic weapon. The Allies eventually destroyed the prototype tanks and scrapped the research.

After the defeat of Nod-inspired Stalin's crusade to conquer Europe, the Mammoth tank remained in limited production for the needs of the Soviet Army. It was also the basis for an upgraded version used by GDI in the 1990s.

After the defeat in Second World War, the Mammoth tank was phased out of service in favor of the more powerful Apocalypse tank.

The Mammoth Tank is identical to its GDI counterpart, except more expensive.

The Mammoth tank is a one-tank-army. It has the most powerful guns of all tanks and the missiles are very effective against infantry, often killing them in one hit. However the Mammoth is the slowest vehicle in the game, is quite expensive, has a long build time, and any type of basic tanks (including Allied Light and medium tanks and Soviet heavy tanks) can outnumber it with relative ease. The Mammoth tank may self-repair to 50% health.

The Mammoth's cannons fire in a slightly staggered method, for a one-two punch effective against armor. This makes the second shot less likely to hit against moving targets.

The missile racks are effective against infantry, structures, and enemy aircraft, though they have a significant reload time. This makes mammoths vulnerable to concentrated aerial attack.

Mammoth tanks can be built by the Allies only in the Giant ants missions.

Mammoth tank coming out of the war factory

Mammoth Tank knocked out. It appears that this tank was moving at relatively high speed when it was knocked out, and had enough momentum to keep rolling on its own until crashing into a large tree.

A Mammoth tank in the Allied forces against the ants.
Add an image to this gallery 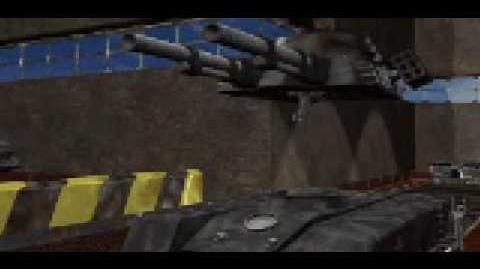 When a mammoth tank is destroyed the screen shakes.

Retrieved from "https://cnc.fandom.com/wiki/Mammoth_tank_(Red_Alert_1)?oldid=240727"
Community content is available under CC-BY-SA unless otherwise noted.