The Mammoth Mk. I[1] (or X-66 Mammoth) was a GDI heavy assault tank that entered service during the First Tiberium War.

The Mammoth continues to be a behemoth dominating the battlefield, with rockets effective against both land and air targets (though the latter requires a lot more practice) and enough armour to withstand severe damage. It can heal itself without a repair gun, though at a slow rate. Also, armour cannot be regenerated.

It was quite vulnerable to massed attacks, requiring a good escort and support to last long in the battlefield.

The Mammoth used in Command & Conquer: Renegade was originally intended to be much larger. Game documentation also claimed the tank was armed with 36-inch guns. 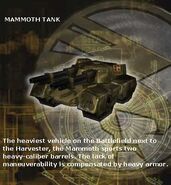 Retrieved from "https://cnc.fandom.com/wiki/Mammoth_tank_(Renegade)?oldid=217533"
Community content is available under CC-BY-SA unless otherwise noted.