The Mammoth Mk. IV is a GDI Offense-class heavy tank in Tiberian Twilight.

In the wake of the Scrin invasion of Earth, GDI's Mammoth 27 Tanks seemingly met their match with their Scrin equivalent Annihilator Tripods in terms of firepower. But most of the Mammoths that had been destroyed in the Third Tiberium War was largely due to the Scrin's superior airforce. After the war ended, and when the construction of the Tiberium Control Network was under way, some of the vocal GDI veterans felt that the Scrin invasion could have been better repelled if the military still utilized Mammoth Mk. II walkers to combat the aliens. The GDI military was divided as to which worked best: the tank or the walker. In the end the GDI Council decided to commission the design of a new Mammoth tank and revitalise its walker brother.

Just like its predecessors in the tank form, it carries breathtakingly powerful firepower and armor, at the cost of speed. It is currently GDI's premier offensive anti-tank unit but its walker brother, the Mastodon, holds the title of being the most powerful unit in the GDI arsenal.

The Mammoth Tank Mk. IV is the first heavy vehicle available to the GDI Offense Class. It is unlocked at Level 12 and available at Tier 3. Being heavy assault tanks, they are rather slow and easy to avoid by most units.

Mammoth Mk. IVs are armed with 2 powerful cannons and 2 rocket pods, enabling them to handle assaults from both ground and air, though they specialize against medium vehicles. When upgraded with a Blue Tiberium Core, its cannons are replaced with railguns and it gains an extra 2 rocket pods, giving it even more firepower.

The Mammoth Tank is protected with the advanced and extremely durable Octagonal Composite armor, which is incredibly resilient against all attacks, except energy weapons. It has more health than any other combat unit in the game—even its significantly larger brother, making it useful for tying down units and soaking up damage.

The new Mammoth Mk. IVs are equipped with a Taunt Laser that forces enemy units in range to attack the very durable Mammoth Tank instead, allowing it to draw fire away from more vulnerable units. Mammoth Tanks can also be equipped with Mirror Plating, which allows them to deflect some incoming shots, in a similar way to the Refractor. These upgraded Mammoth Tanks can be easily distinguished by their very shiny look. 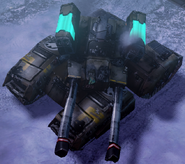 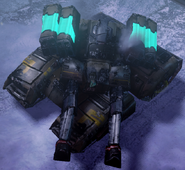 An Upgraded Mammoth Tank Husk
Add an image to this gallery

Retrieved from "https://cnc.fandom.com/wiki/Mammoth_tank_(Tiberian_Twilight)?oldid=237647"
Community content is available under CC-BY-SA unless otherwise noted.