The Mantis is a Nod Offense-class unit which fires rockets effective against medium aircraft.

It is a development of the original Mantis: a robot armed with surface-to-air missiles that was used by the Black Hand in the period around the Third Tiberian War. Unlike its predecessor, however, the new Mantis can now target ground units and is crewed by female pilot.

The rockets are most effective against medium aircraft, like the GDI Orca Mk. V and Hurricane, and are moderately effective against light/medium ground vehicles and infantry. The Mantis has Medium-type armour, which is resistant to bullets, but is vulnerable to tanks' cannons.

When upgraded with a blue Tiberium core, they gain the Mantis Ballistic Rocket, which is a long-range surface-to-surface missile effective against structures. Since the rocket is a Blast type weapon (which is strong against Reinforced armor), a group of 4 or 5 upgraded Mantises can pull off an early crawler kill.

Its closest GDI equivalent is the Sandstorm MLRS. It can also be described as a "Stealth Tank minus stealth", and in comparison to the stealthy counterpart has twice the armor and lacks any stealth ability. It is also available at Tier I, unlike the Sandstorm or the Stealth Tank, which is Tier II.

An achievement can be earned if the player uses its rocket to destroy a target.

Need a rocket dropped on anyone? 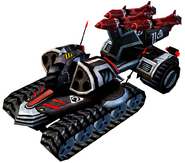 Retrieved from "https://cnc.fandom.com/wiki/Mantis_(Tiberian_Twilight)?oldid=190981"
Community content is available under CC-BY-SA unless otherwise noted.