Start a Wiki
Mantis Tiberium automatic rifle is a Tiberium weapon in Renegade.

Developed by Nod in the closing stages of the First Tiberium War, the Mantis Tiberium automatic rifle is a bullpup assault weapon designed to fire concentrated Tiberium gas from a 50 "round" magazine inserted in the back, capable of firing 300 rounds per minute.

It is commonly used by Acolyte-class cyborgs.

The Tiberium Automatic Rifle or Tiberium Auto-Rifle is an anti-personnel weapon with the added benefit of tiberium poisoning.

Like the Venom chemical sprayer, mutants and Chem Warriors are impervious to the Auto Rifle's tiberium-based projectiles.

Due to how light armor works on vehicles in multiplayer, the Tiberium Auto-Rifle is surprisingly effecting against airborne units and even things lightly-armored vehicles like the Humvee or Buggy. However, it is largely ineffective against more heavily-armored vehicles, such as APCs and especially tanks.

Sydney Mobius is armed with this gun in multiplayer mode, as is the extra Nod unit, the Acolyte.

The weapon's frame and the green capsule in the front are printed with the string TE33-31. 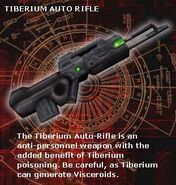 Retrieved from "https://cnc.fandom.com/wiki/Mantis_Tiberium_automatic_rifle?oldid=229700"
Community content is available under CC-BY-SA unless otherwise noted.