Can upgrade weapon with salvaged parts.

The Marauder tank was a medium tank used by the Global Liberation Army during the War against the GLA. It was the bigger cousin of the lighter Scorpion tank, and was their heaviest tank.

The Marauder tank was more heavily armoured than the Scorpion tank, and armed with much powerful cannon the cannon turret could be upgraded by salvaging wreck remains from a land vehicle upgrades increase the damage output and rate of fire, with the second salvage it adds an extra cannon.

The Marauder tank could not rotate its cannon, being a fixed gun rather than a turret. Because of this, the entire tank had to turn and face the target in order to fire. As a result, the Marauder could not fire while moving unless the target was directly in front of it. This made the Marauder especially vulnerable while retreating or against fast-moving units.

The Marauder tank was only accessible with a General's Promotion, obtainable at Level 1.

Marauder tanks could also be upgraded with salvaged parts from destroyed vehicles.

Marauders are very cheap and can be mass-produced easily and quickly. Compared to other tanks, it is fast and is well-armoured. The cannon becomes extremely powerful after upgraded twice with salvaged parts, as the twin cannon fires rapidly and deals considerable damage.

The Marauder fares well against enemy tanks of similar price, such as the American Crusader and Paladin, and the Chinese Battlemaster. With veterancy and with salvage upgrades, a Marauder can even go toe-to-toe with the Overlord tank.

Compared to the Scorpion, the Marauder is tougher and possesses a more powerful cannon, making it a better choice for taking on enemy armour and structures. However, Scorpions with the Scorpion rocket upgrade are a better choice in the early game, due to the lower price and higher speed.

Should be noted, the heavy tank uses a fixed gun system, much like older assault guns, so the whole vehicle needs to turn to attack. 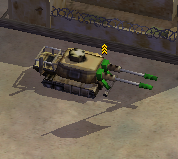 Retrieved from "https://cnc.fandom.com/wiki/Marauder_tank?oldid=246060"
Community content is available under CC-BY-SA unless otherwise noted.