The Mastermind was a Yuri vehicle operating during the Psychic Dominator Disaster. It was a giant psychic brain sealed within an armored vehicle. It had about the same speed as a Rhino tank. Its armor was also similarly strong.

Yuri's specialists wanted to create a powerful tank-like weapon system to achieve some sort of parity with Allied Prism Tanks and Soviet Apocalypse tanks. Since Yuri's speciality was mind control, the result was a massive bio-engineered brain mounted on an armoured tank-like chassis able to rapidly mind-control all enemy units near it. The brain was designed to continuously mind control all enemy units within range so as to cause mayhem in large enemy formations before or during an attack. One fatal flaw in the design however, due to the contingency of war, new more powerful cyborg-electronic circuit systems are not ready in time for the Dominator Disaster War, forcing Yuri's engineers to make do with an adaptation of the design used on psychic towers which are too weak to fully realise the potential of a brain this powerful. As a result, whilst the Mastermind is theoretically able to control more units than the psychic towers, it cannot do so without sending it's electronics into overdrive, leading them to overheat and eventually burn out, frying the brain and destroying the vehicle.

The Mastermind was erased after the Soviets meddled with the space time continuum.

This weapon system is particularly deadly when deployed at the enemy assault force's is assembly point where they can cause mayhem in the enemy ranks. This ability makes it potentially devastating to an otherwise unstoppable armoured column before they make their mark on the battlefield. One major weakness with this weapon system however, is its lack of self-defensive armament. This makes it completely helpless against units immune to psychic control such as Terror drones, robot tanks and air units when airborne. As mentioned above however, it's greatest weakness is that this weapons system is prone to burning out when it has too many units under its control. This led to the tactic of rushing the Mastermind with many cheap and fast units such as Conscripts, Flak Tracks or IFVs. Paratrooper conscripts are ideal for this task as they are both free and plentiful. Yuri's Masterminds can control up to 3 units each without going into overdrive. 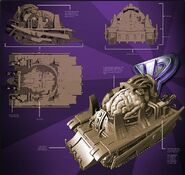 Icon with Chinese text
YR Mastermind Textless Icons.png
Icon with no text
Add an image to this gallery

According to the concept art for the Mastermind, the real-life scaling of the vehicle shows that the it is twice the size of a tank.

Retrieved from "https://cnc.fandom.com/wiki/Mastermind_(Yuri%27s_Revenge)?oldid=176979"
Community content is available under CC-BY-SA unless otherwise noted.