The Mecha Tengu was an anti-infantry robot developed by Tenzai Robotics and used by the ERS during the Third World War and The Uprising. It was capable of transforming into the Jet Tengu, an air-superiority fighter.

By studying their enemies closely as they fought one another, the Empire of the Rising Sun was able to secretly develop a variety of weapons designed to exploit their specific weaknesses. One of the most notorious and emblematic examples of this has to be the dual-form pilot-assisted combat robot known as the Mecha Tengu. Thousands of men have already lost their lives to these strange, fast, and terrifying weapons.

The Mecha Tengu is named after a Japanese mythological creature known for causing harm and mischief, as well as for its distinctive long nose. The vehicle has an anthropomorphic, aggressive shape made of a dark-colored alloy that is highly resistant to smaller weapons. Its protruding air intake likely is an homage to the long nose of the mythical Tengu, while its "arms" and "legs" primarily serve as stabilizers. Also like its namesake, the Tengu can fly: In fact, the vehicle need never touch the ground, as its boosters and stabilizers allow it to hover a few meters above any surface. By skating across this layer of air, the Tengu can ignore many types of terrain obstacles that would normally slow down infantry or simpler vehicles. When engaged in combat, the Tengu fights using a pair of burst-firing autocannons mounted on either side of its air intake. Essentially these are like a higher-caliber version of the weapon used by Imperial infantry divisions, and offer an even faster rate of fire and excellent accuracy at medium- to short-range.

In the blink of an eye, the Mecha Tengu can switch to Jet Tengu mode, which has the much-more-conventional shape of a fighter aircraft. This configuration lets the unit travel at much greater top speeds and at high altitudes, such that its weapons can be brought to bear against other aircraft. The implications of this are profound, and the real-life consequences are mounting. In effect, no area is safe from this unit, and veritable "flocks" of Tengu continue to appear without warning to attack Soviet-controlled production lines, ore refineries, and oil derricks. A mere five Mecha Tengu once managed to destroy an entire Soviet forward base, using tactics the Soviets later derided as "arrogant, vile, rude, deplorable, and completely unfair." Gliding across the base in jet form, the Tengu flock first drew the Soviets back to base as a ruse. As the column of Soviet Bullfrog transports hurried back, fixing to shoot down the enemy fighters with their anti-aircraft guns, the Jet Tengu dropped back down to ground form again and quickly destroyed them. Soon after, the Tengu dealt catastrophic damage to a super-reactor in the vicinity, whose blast took care of the remainder of the base. By now, most everyone has seen the famous photograph of the Tengu flying away from the terrible explosion.

Piloting a Mecha Tengu must require a tremendous amount of skill and training since it is essentially two vehicles in one. Excellent physical fitness must be needed to withstand the G-forces involved in transitioning from one form of the vehicle to the other and back, especially since the Tengu's full-body cockpit apparently translates reflexive motions directly to combat maneuvers. However, it is widely known now that the allure of piloting such state-of-the-art craft drew out volunteers by the millions from the ranks of the Empire's youthful nationalists (and thrill-seekers). And even the very small qualifying percentage from that number proved to be enough to change the face of war.

The Mecha Tengu's autocannons are effective against infantry and light vehicles, meaning it can hold its own against most tier 1 units. However, they should never be used against main battle tanks, which can make short work of them. Its ability to transform into Jet Tengu allows it to quickly escape a losing battle, as long as there are no enemy anti-air units nearby.

The Jet Tengu is no match for the Apollo fighter and the MiG fighter one on one. However, it is cheaper to build than either of them, does not need to reload, and can be built without limit, meaning Jet Tengus can simply overwhelm enemy fighters with numerical superiority; they can also quickly transform into their Mecha forms to escape a losing air battle, provided the surface is clear of threats. As with its Allied and Soviet counterparts, it is defenseless against ground-based AA weapons, and must avoid them at all cost, due to its fragile armor.

Since the Tengu's transformation has a cooldown time of 15 seconds, it is important to avoid engaging the enemy during the cooldown time, so the Tengu can quickly transform during an emergency.

Battlefield reconnaissance has revealed at least these facts about the Mecha Tengu:

• Variable transform -- Based on the Empire of the Rising Sun's VX line, the Mecha Tengu's most remarkable trait is its ability to rapidly switch between two completely different modes. One is effective while fighting on surface areas and the other is an air-superiority fighter. While the transition between forms takes less than a second, the process is demanding both on the pilot and the drivetrain.

• All-terrain mayhem -- There is no target that can elude the Mecha Tengu. By land, the robot's boosters and stabilizers grant it excellent top speed, allowing it to easily overtake most vehicles, although it must steady itself in order to fire. Further, the Tengu can travel and fight over water with nearly the same effectiveness. Of course, it may also convert to Jet Tengu form for maximum speed.

• Jet mode -- In its alternate form, the Mecha Tengu is the Empire of the Rising Sun's mainline air superiority fighter. Not only is the Jet Tengu form extremely quick, its stabilizers and configurable wings allow it to hover aloft to maximize attack power and accuracy. The very same weapons the Tengu uses to cut through enemy infantry are proven to be very effective against aircraft as well.

• Mass-produced -- The Mecha Tengu is believed to be one of the Empire of the Rising Sun's most successful combat vehicle designs, such that the unit has gone into heavy mass-production recently, even as training programs for additional pilots have flourished. As a result, the latest Mecha Tengu models are lighter and somewhat less durable—though by no means should they be underestimated.

Shot down in jet mode 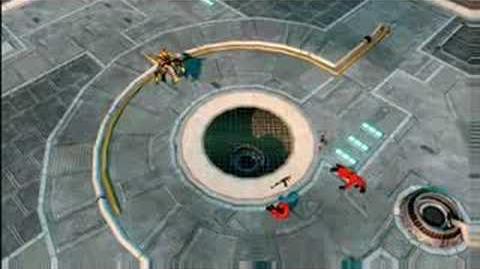 Retrieved from "https://cnc.fandom.com/wiki/Mecha_Tengu/Jet_Tengu?oldid=240773"
Community content is available under CC-BY-SA unless otherwise noted.