The concept of an all terrain battle walker, capable of delivering heavy firepower from any location on the battlefield, first surfaced during the period of time between the First Tiberium War and Second Tiberium War in the form of the prototypical bipedal X-O Powersuit. This versatile unit was lightly armoured, but could carry several different weapon systems, which included a 35mm rocket launcher and a high-powered laser. The results of initial tests were so promising, the technology was extensively researched and developed. 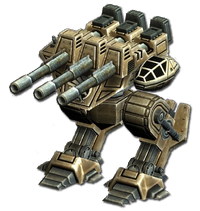 Walkers formed the backbone of the GDI military in the Second Tiberium War, following aforementioned research and development. The Humvee was superseded by a Wolverine Powered Combat Suit with twin autocannons on its arms with recon as its role. The M1 Abrams was replaced with the Titan Medium Mechanized Battle Walker with a 120mm APDS side-mounted cannon. The Titan had a fairly long range and was often used to take out Nod defenses beyond their range. However, the technology was still being further developed, as the mighty Mammoth Mk. II was being developed.

Following the events of the Second Tiberium War, GDI was expanding on the concept, developing another walker unit, the Juggernaut, equipped with three 155mm naval cannons, as a countermeasure to Nod artillery. CABAL also invented the Cyborg Reaper, which grayed the line between cyborgs and walkers, as well as the massive Core Defender.

However, as with everything, walker technology had its drawbacks. The mechanisms utilized by these units were not only expensive to maintain, and complicated to build—they also required constant maintenance and were relatively weak and fragile in the face of enemy fire, as well as being unreliable in the field. Another weakness was their susceptibility to explosives when placed on legs. As such, the frontline walkers were gradually phased out and replaced with cheaper, more resilient tanks, such as the MBT-6 Predator and Mammoth 27, with only the long-ranged Juggernaut Mk. III remaining in general service in 2047. Steel Talons would be the last division of the GDI to widely employ walkers, such as the Titan Mk. II and Wolverine Mk. II. However, despite being temporarily removed from field service, many commanders who had piloted walkers during the Second Tiberium War remained strong proponents of the technology, and saw to it that research continued.

Following the Third Tiberium War, many in the GDI military felt that the Scrin invasion could have been repelled more easily if they had kept their old mechanized walkers. It was not until the Tiberium Control Network was being constructed that more resilient and maneuverable walker technology was developed. and many walker units were reintroduced alongside their more conventional counterparts. By the Fourth Tiberium War, walkers like the Crawler and the Mastodon were widely deployed.

Ironically, Nod managed to overcome many of these drawbacks that GDI encountered. First, Nod's Mobile Construction Vehicle became a quadrupedal walker, allowing it to navigate the rugged yellow zones easily. Also, the Black Hand, under Marcion, developed the Purifier walker, equipped with an Obelisk-derived laser, as well as flame weaponry and a subliminal influencing device.

Following the resolution of faction strife, the Purifier was succeeded in general Nod use by the upgradeable Avatar Warmech. The Avatar packed a considerable amount of firepower in its scaled-down Obelisk laser and was sufficiently armoured to take on a large number of smaller ground units. However, it suffered from being costly and vulnerable to attacks from aircraft, but compensated it to a degree with its upgrade capability (in hindsight, this technology was viewed as a drawback of the original design, as many Avatar pilots would deplete their own forces in order to increase their chance of survival). A walker that combines the Avatar technology with GDI's Mammoth Armored Reclamation Vehicle project, the Nod Redeemer is a massive four legged walker armed with a triple-barreled Superlaser and a Rage Generator.

In the Ascension Conflict, the Brotherhood and the Separatists still used walkers, such as the Avatar Mark II Warmech and a new walker from the Crawler family, known as the Offense-class Crawler.

When the Scrin invaded Earth, they brought their own mechanized battle walkers with them. However, the technology behind Scrin walkers may be considered far removed from traditional human walker technology, involving bio-mechanical constructs that blur the line between machine and creature.

This created difficulty in what Scrin units could be classified as walkers. Most experts reject the idea of any Scrin "infantry" as being walkers as the workings of their legs are achieved utilizing organic components.

Though Gun Walkers, Shard Walkers and Corrupters are classified as walkers, Annihilator Tripods, Reaper Tripods, and the dreaded Eradicator Hexapod fit the definition in the most traditional sense.

Retrieved from "https://cnc.fandom.com/wiki/Mechanized_walkers_(Tiberium)?oldid=226259"
Community content is available under CC-BY-SA unless otherwise noted.