Nod also deployed medium tanks (possibly stolen/captured) during the war, but in much smaller numbers compared to their series of light tanks.

After the First Tiberium War, GDI replaced the Medium Tank with the Titan Mk. I medium battle walker, only to return to cost-effective conventional tank technology again in the Third Tiberium War.

The Medium Tank is a workhorse combat vehicle, armed with a single 105mm cannon, firing APFSDS shells[1]. It is the backbone of GDI's armoured divisions in Tiberian Dawn.

Superior to almost all Nod armour, the Medium Tank is durable, though abit slow, yet powerful and cost-friendly for its class, outperforming Nod's heaviest commonly-deployed combat vehicles, the Light Tank and the Flame Tank, in a one-on-one match. Priced at only $800, The Medium Tank is best suited at fighting most vehicles and is still capable of maintaining its effectiveness even late into a arms-racing skirmish, making it one of the most cost effective vehicles in the game. Given its firepower and protection, the Medium Tank also serves as an decent fire support platform against base defenses that do not have anti-tank warfare in mind like enemy GDI gun-based Guard Towers and Nod SAM Sites. All-in-all, the GDI Medium Tank is a champion of mechanized warfare (after the Mammoth tank). Due to its protection level and crew training, sometimes a crew may survive the destruction of the tank (albeit not in his/her best condition) and ready to continue fighting. This tank's cannon fares better than Nod's counterpart as it can shoot further and does more damage (depend on the terrain)

The GDI Medium Tank is only a specialist. In unconventional warfare, the Medium Tank performs miserably against targets that are too effective to deal with, relying only on the same defining characteristics of a main battle tank to survive: speed, protection and firepower. Infantry like the Rocket Soldier are too difficult to aim at and kill with cannons, and many base defenses such as the GDI Advanced Guard Tower and the Nod Obelisk of Light are far too strong to be brought down with just an antitank cannon. Even in its own turf, it faces challenges: ground vehicles like the Recon Bike and the Stealth Tank can take a chance at winning against a Medium Tank in superior numbers, speed or stealth, while flying vehicles like GDI Orcas and Nod Apaches can fight Medium Tanks without fear of retaliation from its anti-tank cannon.

These weakness, however, are largely negated if the Medium Tank is deployed in great enough numbers. In large groups, they can easily crush large numbers of Rocket Infantry, as they are too slow to escape the tanks, overcome loses inflicted by aircraft and simply overwhelm base defenses.

In Command and Conquer: Renegade, the Medium Tank is portrayed in better light. In-game, the Medium Tank is able to perform maneuvers that are quick for its weight. More importantly, its 120mm anti-tank gun can be use as a anti-aircraft weapon as its cannon can conveniently adjust its angle so that it points upwards into the air up to a certain limit, which can become a potential killzone against Nod Apaches and Chinook transport helicopters.

Nonetheless, the Medium Tank is designed to handle any threat in the battlefield provided it is well supported with auxiliary infantry and vehicles.

Medium tank in a unused cutscene

Destroy by a rocket launcher

Real-life M1 Abrams
Add an image to this gallery 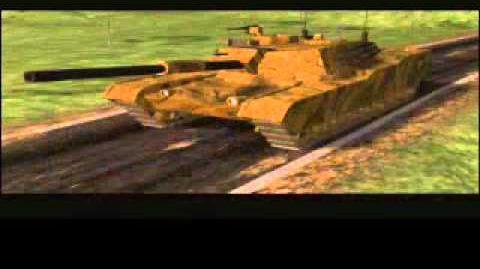 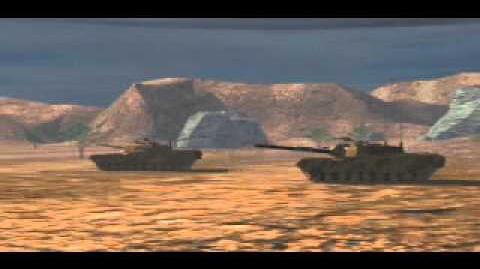 Retrieved from "https://cnc.fandom.com/wiki/Medium_tank_(Tiberian_Dawn)?oldid=240653"
Community content is available under CC-BY-SA unless otherwise noted.