The Merlin personal ion cannon is a large energy weapon in Renegade.

A shoulder-mounted, stout-barrel weapon, the Merlin is an attempt by GDI to harness their most destructive weapon and put it in a portable, mobile package. While cumbersome, it is exceedingly powerful. It works by periodically erecting a cylindrical top-mount that collects excited ion particles from the atmosphere, which then are superheated to 6000 degrees Fahrenheit \ 5075 degrees Celsius and magnetically propelled through the thick, stout barrel. The azure stream is extremely destructive, especially when paired with other sophisticated equipment, such as the Prototype Mobius suit.

It's used exclusively by GDI in SP and MP. In multiplayer Sydney Mobius uses it. With devastating firepower capable of destroying tanks and infantry alike, it was extremely effective when used against tanks on foot, but can also be used against enemy soldiers as well.

Its long reload times renders the user vulnerable if the target is not killed. 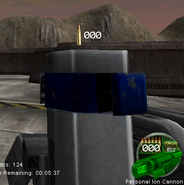 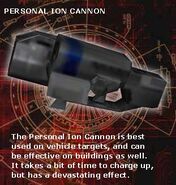 Retrieved from "https://cnc.fandom.com/wiki/Merlin_personal_ion_cannon?oldid=150036"
Community content is available under CC-BY-SA unless otherwise noted.