The MiG is a fighter-bomber appearing during the Psychic Dominator Disaster. They served as tactical air support for Boris.

The Second World War proved to be a dark time for the Soviet air-force. With the USSR beaten and it's treasury rendered nearly dry in its desperate final struggles to escape defeat, countless Soviet planes were relegated to the metal works to be processed into more "civilian" applications... all under the watchful eyes of the Allied peacekeeping forces of course. Such was the fate of planes like the Yak fighter and its kindred, with the end result being a nation rendered completely devoid of a truly solvent air capability.

However, there was some elbow room that the Allies were willing to grant their vanquished adversary. In order to grant the USSR the bare minimum of air defense, mostly as a way to avoid any treaty-based squabbles, the Allied forces allowed the USSR to retain a small contingent of MiG fighters for the purpose of national self-preservation and protection. This proved to be a backhanded mercy at best however, as the trials of war had consumed all but the most fleeting amounts of jet fuel needed to power the aircraft, making them for all intents and purposes "grounded." With the yoke of defeat on its shoulders however, the USSR had little choice but to accept its victorious adversaries demands, adding yet one more bauble in their bag of post-war humiliations; an air-force that couldn't fly.

Decades passed, a new premier took the reins of the Soviet Union, and the flightless MiG air-force continued to gather dust in a nearly abandoned hangar. The nation they had once served had practically forgotten about the reliable and deadly MiGs, instead turning to the slow and powerful Kirov as the staple of Soviet air power. The Third World War passed by with the Soviets once again defeated, and it seemed that the abandoned MiGs would meet the fate they had narrowly avoided after the Second World War; being melted down for excess materials to support a beleaguered nation.

When the Psychic Dominator Disaster occurred, the Third World War was re-booted thanks to Allies' temporal manipulation, and the both Allied and Soviet forces found themselves pitted against a common enemy, the psychic madman Yuri. The time for petty concerns over jet-fuel supplies was clearly over, with the Red Army suddenly remembering the MiG squadron nobody had talked about for several decades and putting it back into use.

This time however, instead of acting as a true air force, the reinstated MiGs now served the role of a hit and run tactical team, working in conjunction with Soviet hero Boris, who provided the jets with targets via his laser targeting system. This proved to be a sterling solution to the low supplies of fuel needed to keep the MiGs airborne, as the planes would only need to make short attack runs before returning to base to refuel and re-arm.

Still, the Red Army was not willing to grant the expensive services of the MiGs without pension, even to a soldier as decorated as Boris. Thus it was that the number of MiGs Boris was permitted to call upon during battle was based upon his current level of battle decoration; the higher his promotion, the more MiGs he could call. When fully promoted, Boris could summon a full squadron into battle, a sight that proved certain doom to whatever building had the unfortunate luck of being touched by his laser sight.

The laser-guided bombs used by these MiGs were quite accurate and powerful as a single bombing run is usually enough to destroy every structure. The MiGs also had good armor, although they can still be shot down by enemy anti-air. The MiG Fleets is called upon from outside the theater by Boris as soon as his laser targeting is in effect, flying toward the target, and shoot their ordinance before evacuate from the theater.

If Boris's laser targeting is called off for any reason the strike force will leave the mission area, but if the targeting system is reengaged before the MiG is out of the area the said MiG will redirected to the new target almost immediately. There are no need for commander to construct any supporting facilities for the MiG whatsoever. When the MiG is successfully defeated by opposing anti air-defense it will take some time for the replacement plane(s) to arrive in the area. It is suggested that the enemy anti aircraft potency must be nullified first before the main target.

After the Psychic Dominator Disaster, the Soviets introduced a new design of their MiG. It attacks only air units but needs to reload at an Airfield.

After Cherdenko's trip to 1927, Mig were remade in the War of the Three Powers, which was more powerful but have to reload at an Airbase. The laser targeting system survived, but this time executed by Badger bomber. 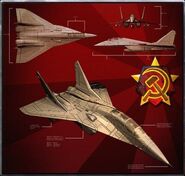 The MiGs themselves strongly resemble the real-life MiG-29UB (two-seated MiG-29) but with a redesigned delta wing.

Retrieved from "https://cnc.fandom.com/wiki/MiG_(Yuri%27s_Revenge)?oldid=230875"
Community content is available under CC-BY-SA unless otherwise noted.