The Militant rocket squad was Nod's anti-aircraft and anti-tank infantry in Tiberium Wars and Kane's Wrath.

They are chosen based on former military training from state governments or partisan experience[1], but generally lack the refined training that GDI missile squads receive. They wield Airburst rocket launchers, and are able to destroy aircraft and significantly damage tanks, especially when garrisoned in civilian buildings. Despite their status as militants, they are well-trained enough and considered essential that neither the Black Hand's desire for purification nor the Marked of Kane's reliance on cyborgs could cause their removal from their respective selections of infantry.

The rocket squads are easily recognizable by their red ponchos emblazoned with Nod's emblem, along with red hoods and white scarfs covering their faces. This stands in contrast to regular militants, who wear gray civilian clothes or TWII Nod combat armour.

They are marginally effective against other infantry and can easily be killed by rifleman squads, grenadiers, or buzzers. Anti-Infantry specialists such as sniper teams can eliminate entire regiments of them without too much trouble. The best way to use them is in garrisoned buildings or from ambushes. Otherwise, they don't stand much of a chance. 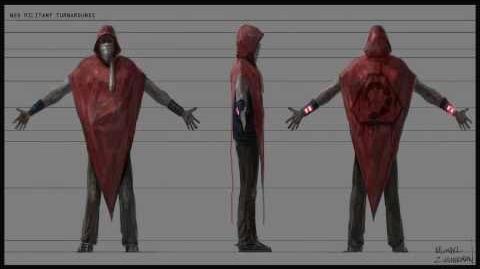 •A Rocketeer gets on the ground and examines his launcher.

•A Rocketeer scratches his head.

•A Rocketeer seems to be annoyed and "gets" the attention of the person to his left.

Retrieved from "https://cnc.fandom.com/wiki/Militant_rocket_squad?oldid=237553"
Community content is available under CC-BY-SA unless otherwise noted.