Militants are primarily disillusioned (or possibly ecstatic) men and women who have suffered from harsh lives in Yellow Zones and have been attracted to service in the Nod armed forces by the latter's relief efforts. The use of militia plays an important role for Nod, the inevitable product of the "Control The Media, Control The Mind" social doctrine, with commanders preferring to sacrifice their militant auxiliaries rather than endanger the thin ranks of the surviving Nod regulars and "true believers" who comprise the Brotherhood's cherished elite troops, such as Shadow Teams and Black Hand troopers.

Militants wear drab, gray hooded jackets and pants, with bandoleers, backpacks, and goggles. In some regions, they wear old worn Second Tiberium War combat armor previously used by Nod light infantry ranks. The Militants use a variety of small arms, ranging from old 20th century assault rifles, such as the late 20th century GAU-3 Eliminator 5.56mm assault rifles, to new GD-2 rifles. Militants are poorly trained and equipped when compared with their GDI counterparts, but their fanatical zeal, willingness to fight for the Brotherhood and sheer numbers make up for their weaknesses.

Unfortunately, militants have universally bad armor and are, generally speaking, the weakest units in the conflict. Pretty much anything capable of taking on infantry should be able to dispatch them without too much trouble. They are poorly trained compared to their GDI counterpart, the riflemen squad. However, they are tied with Scrin Buzzers for the position of cheapest unit that can be built at 200 credits while also having the largest squad size of any unit. This distinct advantage can often be seen utilized by Nod commanders, to simply overwhelm their opposition in bodies, using their dedicated foot soldiers as nothing but meat shields while more advanced (and expensive) war machines march forward. They are particularly effective in overwhelming enemy units whose effectiveness depends on the number of individual bodies, rather than armor or defense (such as GDI sniper teams). They can be trained in a short time, making them favored in Rushing Strategies. They become more effective with the Tiberium infusion and Confessor upgrades, which can make a significant difference in certain situations.

Effective counters to these infantry formations have been developed by GDI in the course of their engagements in Yellow Zones in the form of advanced grenadier units garrisoned in Guardian APCs and heavy anti-infantry units.

The Black Hand and the Marked of Kane prefer to rely on well trained squads of elite soldiers, respectively Confessor Cabals and Awakened cyborgs.

Concept art for a group of Nod Militants, armed with a variety of weapons 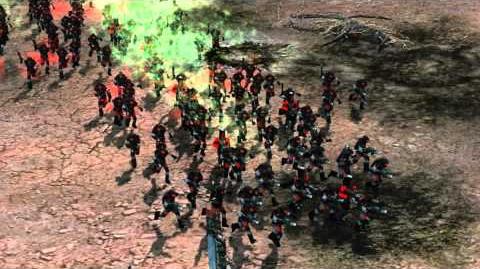 •A militant looks down the sights of his rifle and gives it a hard tap.

•A militant taps his gun and looks down its barrel.

•A militant throws a rock in the air and uses his gun as a bat against it.

•Occasionally a militant will rapidly scratch his stomach and head chilst carelessly waving his gun around by his side.

Retrieved from "https://cnc.fandom.com/wiki/Militant_squad?oldid=237506"
Community content is available under CC-BY-SA unless otherwise noted.