Can disguise into tree

The Mirage tank is the Allies' supreme stealth tank used during the Third World War and the Psychic Dominator Disaster.

The tank is a technological marvel created by Albert Einstein. Developed relatively late in the war, it incorporated technology allowing it to take on the appearance of any organic item in order to disguise itself. Like in Shakespeare's Macbeth, the Mirage tank was designed so that the forest could move.

The Mirage consists of a hemispherical turret mounted on a light tank chassis. The most prominent features, when not in hiding, are the twin projection units extending from the sides of the main turret. They change the tank's appearance to that of a nearby tree in the eyes of the enemy. They can take out enemies using a surprise attack. They attack with a heat-ray weapon.

It can quickly snipe almost all infantry, Soviet or Yuri, in just one or two shots and destroy most tanks in between three and five. Light vehicles like the Flak track do not stand much of a chance against the Mirage tank. A group consisting of 3 to 4 Mirage Tanks can quickly destroy most enemy buildings except for the construction yard. However, its best use is as a defender of vulnerable areas, as a group of them can lie in wait and then ambush nearby enemies to offset its apparent lack of armor protection.

Their first appearance is in the third to last mission of the Allied campaign, when the Commander had to defend Einstein's Laboratory and the Chronosphere.

It is not known to operate after the events of the Psychic Dominator Disaster. After Cherdenko's trip to 1927, the Mirage tank was redesigned in the War of the Three Powers and was armed with a Spectrum turret, similarly used as the Prism technology in the Third World War. 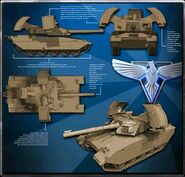 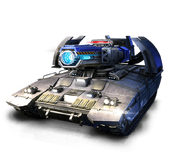 Retrieved from "https://cnc.fandom.com/wiki/Mirage_tank_(Red_Alert_2)?oldid=240121"
Community content is available under CC-BY-SA unless otherwise noted.