The Mirage tank was an advanced Allied battle tank first seen during the Third World War.

Created by the FutureTech Corporation based on a French tank chassis and weapon design, the Mirage tank combines great firepower with an advanced camouflage system, making it ideal for ambushing Soviet armor divisions. The sophisticated systems on the Mirage Tank demand years of training to master.

The name of the Mirage is a reference to its reactive camoscanner technology, which envelops the vehicle in a camouflage field that causes it to resemble a nearby mundane object, such as a tree or a truck. The camouflage is capable of fooling both naked eyes and most scanners. However, Mirage tanks can only remain concealed when they do not fire and remain motionless, to reduce heat signatures and conserve energy. Using its gap generator device, it can invert its camoprojector field onto nearby Allied forces with the appropriate transmitters. While Mirage tanks cannot disguise themselves or use their weapon while the gap generator is active, they are able to conceal small armies in this fashion.

The Mirage is armed with a spectrum dispersion cannon that focuses and amplifies light waves to form an extremely destructive (though short-ranged) burst of high-energy photons, which can cut through any known substance easily. The spectrum beam's energy disperses from its targets, reflecting onto nearby forces, and making it easier to engage multiple hostiles. The spectrum cannon must be firmly mounted into the chassis of the Mirage tank. Though they are maneuverable enough to be able to quickly turn to face most armored forces.

The Mirage tank is the most advanced land vehicle available to the Allies. It has significant firepower and is effective against all surface targets. This, combined with its ability to camouflage itself while stationary, or not using its secondary ability, makes it perfect for ambushing enemy forces. It does, however, have very weak armour and the spectrum cannon has a relatively short range. In order to construct Mirage tanks, an Armor Facility with access to Max Clearance is required.

Both the disguise and the cloaking field can be neutralized by attack dogs, war bears, and burst drones.

Note that critically damaged Mirage tanks loses the ability to cloak themselves when idle.

Upon exiting an Armor Facility

Moving when use gap generator 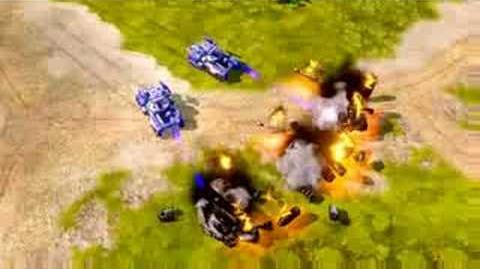 Retrieved from "https://cnc.fandom.com/wiki/Mirage_tank_(Red_Alert_3)?oldid=229745"
Community content is available under CC-BY-SA unless otherwise noted.