The Missile Squad is employed by the Global Defense Initiative that entered service during the Third Tiberium War against enemy armour battalions and structures that appears in Command & Conquer 3: Tiberium Wars and Kane's Wrath.

These two man teams are armed with FGM-90 shoulder mounted missile launchers that can be employed against armour, structures and aircraft thanks to the weapon's limited tracking ability.

The Missile Squad's soldiers wear standard GDI combat armor, which can be upgraded to composite armour suits or Tiberium field suits. Their helmets are modified with optical sights that allow them to aim the rocket launcher with precision. As with all GDI infantry, they can be shuttled throughout the battlefield in V-35 Ox aircraft. Some missile squads are also members of elite GDI Airborne divisions.

As a note, soldiers tend to exercise with their missile launchers. Care must be taken that the launchers have their safeties on when exercising, usually doing body and waist stretches. Like all Rocket Soldiers they can't move and fire at the same time.

The Missile Squads can be used as a Tier 1 scout unit along with Riflemen squads . But their usefulness doesn't stop when the commander uses Tier 2 units. They are a powerful counter to aircraft, and in large numbers even to heavy vehicles such as the Avatar Warmech. They can also be upgraded with Composite Armor or, if they are used for Red Zone operations by the ZOCOM, Tiberium Field Suits, which grant them more armor and the ability to travel in Tiberium Fields without getting mutated or killed. They can also call in a V-35 Ox to transport them over cliffs, chasms or water.

A Missile squad in the "ready" position 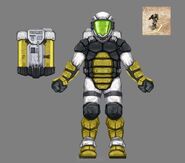 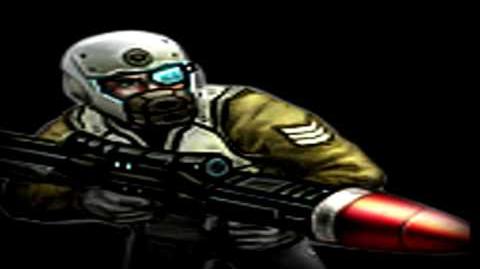 • A soldier checks through the sights of the launcher.

Retrieved from "https://cnc.fandom.com/wiki/Missile_squad?oldid=237513"
Community content is available under CC-BY-SA unless otherwise noted.