The MRLS is slow, lightly armoured, and has a minimum range - it cannot hit units or infantry that are immediately adjaicent to it.

Costing a measly 450$ and available just seconds from a match's beginning, the MRLS is the most powerful weapon available early on, and as an artillery (whose missiles have limited tracking ability), it remains useful throughout the game, especially as a point making machine.

As its armour was not very strong, it was vulnerable to almost all kinds of ordnance. High caliber weaponry were particularly deadly against it.

It is highly effective against dug-in infantry, some vehicles, and to an extent, aircraft. 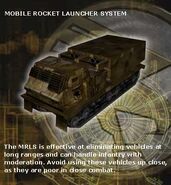 Render
Add an image to this gallery
Retrieved from "https://cnc.fandom.com/wiki/Mobile_Rocket_Launcher_System_(Renegade)?oldid=223022"
Community content is available under CC-BY-SA unless otherwise noted.