The second-generation mobile construction vehicle (abbreviated as MCV) was the heart of every battle force, regardless of faction, during the first and second iterations of the Third World War.

MCVs were armoured vehicles that could deploy into Allied, Soviet or Yuri construction yards and vice-versa. They were defenseless and slow, so they had to be escorted at all times. Despite their bulky appearance, their armour was quite weak.

In vanilla Red Alert 2, the Allied and Soviet MCVs shared their voice sets with the Grizzly battle tank and the Rhino heavy tank, respectively.

Concept art by TJ Frame, originally intended for the Soviets

Alternate scan of the former 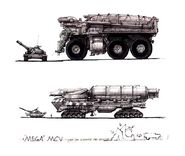 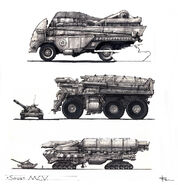 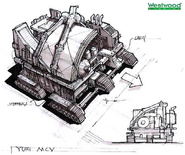 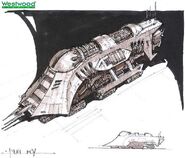 Icon with Chinese text
Add an image to this gallery
Retrieved from "https://cnc.fandom.com/wiki/Mobile_construction_vehicle_(Red_Alert_2)?oldid=240051"
Community content is available under CC-BY-SA unless otherwise noted.