Mobile construction vehicles are the heart of every battle force, regardless of faction.

The timeline manipulation by Anatoly Cherdenko has also altered the designs, functions and abilities of the MCV. The new MCVs were much more advanced then their timeline-erased predecessors in that they were heavily computerized and had amphibious capability. They can be deployed into a Construction Yard even in water. With the exception of the Imperial Construction Yard, they can also deploy buildings in an area highlighted by a Command Hub, an Outpost or within range of any friendly buildings. All Construction Yards can repack into an MCV, should their position come under heavy enemy fire. Structures that produce ground units, such as infantry or vehicle production buildings, cannot be built on water

"An excerpt from, Assessment of the Impact of 3rd Generation Supply Management Technology on Global Strategic Policy by Ian Cochran Burke. This assessment was commissioned to investigate the fiscal, diplomatic, and military impact of adopting the proposed MCV Battle Command and Supply System. Burke's assessment of the impact of the MCV on warfare has proved prophetic in light of recent events."

The tactical benefits of adopting the MCV system have been argued extensively by Mathers, O'Donnell, and others (For a complete historical analysis, see Tactical Engineering: A Review in issue 468 of Modern Warfare), and little need be added here. It is worth noting that, while many focus on the MCV's use of Standardised Production Automated Manufacturing (SPAM) Modules for building construction, in fact the technology of fabricating a wide variety of weapon systems from a single universal component is not new.

Traditional production structures (War Factories, Air Fields, and the like) have been using SPAM modules for over a decade: the original SPAM modules effectively redefined mobile warfare by allowing ammunition, and later spare parts and even vehicles to be manufactured on site. A more revolutionary technological aspect of the MCV system is Virtually Operated Industrial Production (VOIP), a system that allows MCVs to remotely enable the production of advanced technology weapons. This same system can now also be found in the Allied Prospector.

But the true impact of adopting the MCV system will be far more subtle. Mathers comes closest to understanding the ramifications of MCVs on the battlefield in his report to the Budget Office (See Cost Analysis: MCV). His premises are correct. The demand for forward bases in the coming conflict (have no doubt about it - war is coming) will far outweigh the number of MCVs we will be able to deploy. As MCVs relocate across the battlefield, the tendency will be to create many small, stationary bases which will remain behind when the MCV departs.

But his conclusion - that these bases will have no military value and will simply be a continuing drain on our resources - is incorrect. Even if it were true, the strategic benefits would still justify moving forward with the program. The flexibility of an MCV - their extreme, amphibious mobility; their ability to carry enough to be able to deploy a small base and fighting force even when cut off from supplies; and of course their ability to quickly construct a large advanced base when well-supplied - will provide commanders with an unprecedented ability to project precise military power.

But the true value of these small bases will come after the war is over. After the main enemy forces are defeated, what will be needed throughout the combat zone is the capability to quickly restore order and provide a focal point for the integration of the recently liberated into Allied culture and society. The bases that will be created across the countryside as a natural result of MCV relocation will serve this function. They, and the MCVs that create them, will be the enduring beacons of Freedom and Justice in the aftermath of the coming conflict.

The world got its first view of the new Soviet Mobile Construction Vehicle in the aftermath of a devastating earthquake near the small hamlet of Smedznegorsk, Ukraine. Aid organizations and media crews broadcast images of an immense vehicle and its incongruously small crew distributing prefabricated building components to the residents of Smedznegorsk.

With thousands left homeless and quickly darkening clouds on the horizon heralding the approach of a massive ice storm, initial coverage of the government aid effort began suggesting that it may have been too little, too late. Cameras continued rolling in front of speechless reporters as, moments later, a miniature city sprung to life from the wreckage. The structures themselves were grey, drab, and cookie-cutter, but they were warm and dry, a welcome replacement for the piles of rubble that were formerly homes and businesses.

Soon MCVs were seen across the periphery of the Soviet Union, spurring the economy in even the poorest areas of the Union. Although obviously modelled after the Allied MCV, the Soviet Union insisted that their new vehicle was designed purely for internal reconstruction efforts, pointing to numerous investigative reports showcasing the use of the MCV in the field.

Manned by civilians, Soviet MCVs appeared to be operating completely without military support and apparently lacking any sort of automated construction capability. In light of this coverage, the vehicles seemed poorly suited to military ventures. Since the Soviet military seemed to be continuing to use traditional base-building methods, many media outlets began to openly doubt that the Soviet MCV had any military utility at all.

This was dramatically disproven during one of the opening conflicts of World War III. During the uprising in the ancient Central Asian city of Samarkand, Allied observation planes captured footage of a Soviet MCV, which had been rebuilding a nearby province, quickly packing up all modules and civilian workers and veering outside of the reconstruction zone.

In a devastating surprise offensive, Soviet forces appeared several days later from an entrenched firebase a short ways to the north, successfully aiding the civilian uprising and pushing the Allied presence out of Samarkand. Their secret revealed, the fleet of Soviet MCVs sprung into action. Almost overnight, a constellation of military bases sprung up around the world - each centred around and created by an MCV - spawning the first wave of Soviet forces to threaten to overwhelm the Allies.

The Soviet MCV has since become an iconic figure of the people's uprising. When not engaged in combat operations, the vehicles and crews continue to serve communities destroyed by the ongoing conflict, and the grey monolithic structures first seen in Smedznegorsk now shelter countless numbers of the displaced and homeless. With each village rebuilt, the Soviet army is bolstered by the impassioned and the disenfranchised, often leaving each area with another full complement of trained workers.

The MCV crews remain civilian and have little difficulty shifting back and forth between their roles, working alongside military personnel to build a new base one day, and the next day rebuilding a civilian school. Like the military conflict, the battle for the loyalty and sympathies of the civilian population rages on, and the crews of the MCVs are on the front line in both fights.

Not all of the casualties of the recent war have seen combat. Consider the case of Bart Truxton, imprisoned for carrying out espionage for the Empire of the Rising Sun. Though Truxton was recently exonerated, the full details of his story are so fantastic, so utterly unbelievable, they seem literally ripped from the pages of a modern science fiction novel. More and more evidence continues to surface that confirms the story and demonstrates the immense complexity and effectiveness of Imperial espionage activities during the war.

When the first MCV flying the sunburst flag of the Empire of the Rising Sun rolled ashore at the Battle of Green Island, Allied security recognized that a catastrophic breach had occurred. There simply had not been enough time, argued top military intelligence officials, for the Japanese to have developed their own MCV since the Allies had publically revealed their own vehicle - they must have had someone on the inside. Through a painstaking investigation, security personnel tracked down video tapes of Truxton apparently stealing detailed technical documentation about the Allied MCV from a German lab and transmitting it to a ship waiting offshore (later determined to be a Yari mini-sub). A military tribunal convicted Truxton to life in a high-security prison.

It was not until Allied scientists unlocked another mystery of the war - a high-level Imperial encoding process nicknamed"Wistful Blossom" - that the depth of the subterfuge began to become clear. A vast amount of encrypted Imperial information had been intercepted by the Allies in the course of the war, but much of it lay undeciphered in vast databanks. Once "Wistful Blossom" was cracked, a specific division of Allied intelligence was formed with the singular goal of piecing together the fragments of Imperial communications. A year and a half into that process, they decrypted a set of transmissions that told a shocking story.

The Empire of the Rising Sun had deployed an astoundingly lifelike robot, modelled as an exact duplicate of Truxton, to steal information about Allied vehicles. They had also deployed three other robots to observe the real Truxton extensively, gathering all of the personal, professional, and private data required to fashion a realistic facsimile.

These robots then recruited Truxton for a weekly poker game, during which time the doppelganger Truxton obtained the real Truxton's security card and carried out the espionage. All of the robots were then ordered by Imperial high command to initiate self-destruction sequences --- remains of one were found in a warehouse fire, although its exact nature wasn't understood at the time - destroying both evidence of the deception and Truxton's alibi simultaneously.

Upon first being presented with the news of Truxton's unwitting participation in the traitorous activities, the Allied military chafed. It was nigh unthinkable that a plan this elaborate could have occurred under the watchful eye of the Allied military. However, further corroboration came when another set of transmissions was deciphered detailing a similar operation in the Soviet Union. (Unfortunately, Maxim Novikov died in a Siberian gulag before his name was cleared.)

While the stolen technology undoubtedly aided the research efforts of the Imperial MCV program, their vehicle is anything but an exact copy of the Allied and Russian versions. Instead, the Japanese engineers used the acquired designs as a springboard for their own ideas, coming up with a system that is well-specialised for their own military doctrines, and applying the same creativity and attention to detail that Imperial spies used to gather the information in the first place.

Upon exiting an Armor Facility or Seaport

Soviet MCV Concept art
Add an image to this gallery 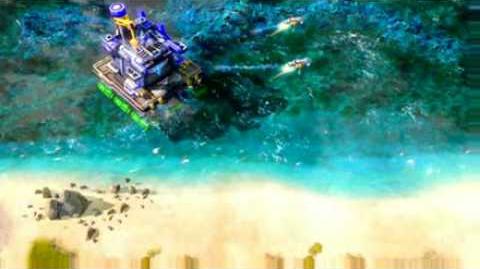 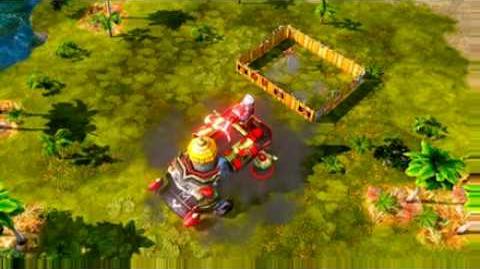 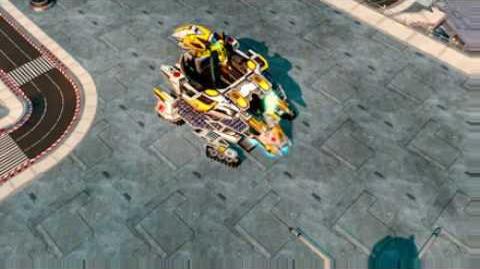 Retrieved from "https://cnc.fandom.com/wiki/Mobile_construction_vehicle_(Red_Alert_3)?oldid=230534"
Community content is available under CC-BY-SA unless otherwise noted.