In the short time between the end of the Second Tiberium War and the beginning of the Firestorm Crisis, Nod managed to adapt the stealth generator technology to a mobile platform, eventually creating a self powered unit. Unfortunately, the unit cannot move and deploy its stealth system at the same time, because of power and stability issues, as well as problems with calculating the light involved.

Although devoid of weapons, it is still incredibly valuable to any Nod commander. It allows a commander to keep units invisible for a sneak attack upon an enemy's base. With two or more units of this kind, it is possible to leap frog with an attack force, sending them from one to another with an overlapping field while remaining completely invisible to the enemy force.

When commander Slavik needed an EVA unit to organize his forces after the betrayal of CABAL he used a handful of Mobile Stealth Generators to cloak his forces from GDI's heavy air force in the area.This allowed his forces to suddenly appear near civilian targets and attack drawing the air forces away from the GDI base so other Nod forces could infiltrate the radar station where the EVA unit was transmitting from.

CABAL used these at least once to attempt to cloak his forces, such as his artillery, while they shelled a GDI base during the Firestorm Crisis. The vehicle was decommissioned following the development of more and more advanced optic camouflage technologies.

These vehicles, along with the stationary variant, were replaced with disruption towers following the Firestorm Crisis.

At tier three, these vehicle become available together with the stealth generator. It has a smaller stealthing area but consumes virtually no base power. The commander usually assigns two of these vehicles, at least, to any task force he/she wishes to mobillize. The two will simply switch operation so that covered force may mobillize while being permanently stealthed. Another deployment method is as an economical base cover when the main stealth generator radius is somewhat inadequate. Against AI these devices are somewhat useless. When taking damage the stealth bubble may flicker. This vehicle can be repaired with the Mobile Repair Vehicle. 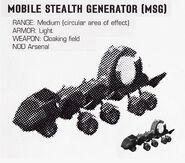 Render from the Firestorm manual

Deployment antimation
Add an image to this gallery

Retrieved from "https://cnc.fandom.com/wiki/Mobile_stealth_generator?oldid=215991"
Community content is available under CC-BY-SA unless otherwise noted.