General Mohmar (aka 'Deathstrike') was the new GLA supreme commander who emerged following the defeat of Dr. Thrax.

Following Thrax's defeat, the GLA suffered from a power vacuum that left some GLA generals turning against each other in a bid for power (including charismatic GLA commander Prince Kassad, who went rogue in his quest for greater fame and influence). However, in spite of the picture created by United States officials the GLA was not completely fragmented. General Mohmar was assisted in his rise to power by an unknown GLA general of great tactical brilliance, who managed to escort his limousine through a US-guarded area to an airfield to be airlifted to safety.

From his new safe haven, Mohmar gathered his forces and proved himself on the battlefield, soon having the very best that the GLA had to offer at his disposal. His main challenger for the control of GLA was Prince Kassad, who had the GLA's advanced stealth technology at his disposal. Before he could pose a serious threat, Mohmar sent the up-and-coming GLA commander to deal with Kassad at his headquarters in Cairo, Egypt, taking the stealth technology. From that point on, Mohmar became the unquestioned leader of the GLA, leading the organisation to victories against the United States and later the occupation of Europe.

Despite taking the US Forces out of the picture, the Chinese were quick to regroup their forces and begin a mass liberation of Europe, eventually pushing the GLA back to Hamburg, where they were eliminated from Europe completely.

It is unknown whether Deathstrike survived the Chinese counter-offensive which drove the GLA out of Europe.

Most enemies would flee from the sight of my armies. Perhaps, this will be worthwhile after all.

How do you feel, General, as the horsemen ride to your doorstep?

My rage will tear your war machine to dust!

We await your next attack with great anticipation.

This battle is beginning to bore me, General.

Are you done, General? Have you exhausted your pathetic resouces?

General, I was bored minutes ago. Now, I am beginning to fall asleep.

Your War Factory is lost. Rebuild it and I will destroy it again.

Oh, General! If you cannot even hold on to your Command Center, how do you hope to defeat me?!

My Command Center! You have forced me to retreat underground, but this isn't over yet, General.

We are kicking you like a wounded goat, General. Admit defeat and spare your agony.

Out of funds, General?

General, you are taxing my resources! Our war will cause my people to go hungry!

Colonel Burton will not save you,General, you'll have to fight this war yourself.

Jarmen Kell? He dares to stand against me?! My vengeance will be most...unpleasent. 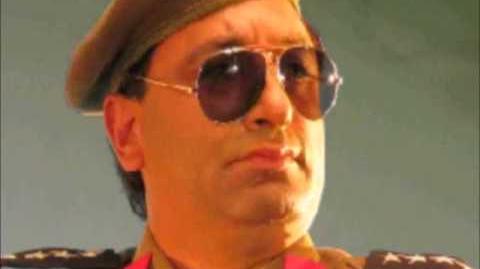 Retrieved from "https://cnc.fandom.com/wiki/Mohmar?oldid=242929"
Community content is available under CC-BY-SA unless otherwise noted.