The "Montauk" was the mobile command center of Nod Commander Anton Slavik during the Second Tiberium War. It provided him with a CABAL interface with which he could control his forces. It had a similar function to GDI Commander McNeil's Kodiak, but instead of flying, it tended to travel through Nod's Global Tunnel System.

Nod, as a largely decentralized organization, faced a unique command and control problem: The commanders of a particular battle needed to be reasonably close to the battle's actual location. While GDI's advanced communications setup could easily handle the troubles of communicating across thousands of miles, not worrying about whatever relays Nod could detect (a number of them were in orbit and reasonably unassailable), Nod could not risk transmissions through large numbers of relays, particularly before the war began in earnest. (see Second Tiberium War.) Therefore, they came up with an ingenious solution. While GDI could take advantage of a flying command centre, Nod would have a mobile subterranean one. Unfortunately, this necessitated a network of tunnels, which at great cost were eventually constructed. The end product, the tunnel-riding command centre, was the Montauk.

The Montauk featured a limited ability to burrow, but given its larger size and especially, larger frontal surface area, it was most likely significantly slower than the Subterranean APC at burrowing. Based on limited internal views recovered from Nod recordings, it is believed that the internal and external dimensions of the Montauk are significantly smaller than those of the Kodiak. The interior was equipped with highly sophisticated communications equipment as well as a CABAL uplink and, by extension, Kane himself. The Montauk is unarmed, but heavily armored. During the Firestorm Crisis, Slavik used the Montauk to evacuate Nod personnel when CABAL went rogue.

Internal view of the Montauk's cockpit 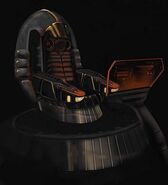 Montauk and the Kodiak

Damage animation
Add an image to this gallery
Retrieved from "https://cnc.fandom.com/wiki/Montauk?oldid=215124"
Community content is available under CC-BY-SA unless otherwise noted.