The Moon rocket platform was used by Yuri's forces to travel from their secret island in the South Pacific to the Moon, where Yuri has established his Lunar command center.

After the success of Operation: Escape Velocity, the Soviet forces discovered this launch platform on Yuri's secret island base. Analysis of the rocket's flight plan reveals that it has been programmed with a course to the moon. Following this lead, a Soviet Commander tracked Yuri's forces to the moon and destroyed the mad man's secret base there. 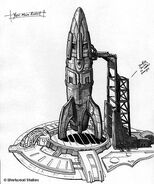 Concept art
Add an image to this gallery
Retrieved from "https://cnc.fandom.com/wiki/Moon_rocket_platform?oldid=222773"
Community content is available under CC-BY-SA unless otherwise noted.