The Mortar Cycle is an anti-structure and anti-infantry support unit.

The motorbike is an old Krasny Motory messenger motorbike repurposed by the Soviet Resistance as a fast attack vehicle. Hundreds of these were sitting mothballed in the company's warehouses after it went bankrupt as a direct result of the exhausting world war. Each vehicle has been modified significantly, including armoured plates, more powerful engine and a reinforced side car with two weapon compartments: a Molotov cocktail storage and a collapsible mortar.

The Mortar Cycle is a fast vehicle optimized for hit and run tactic. They are equipped with either mortar that superb in long range engagement and supplies of Molotov cocktail to handle building clearing. Their weapon is not recommended for a direct engagement against infantry and vehicles, and clearly not suited against aircraft. It is suggested that Mortar Cycle is to be deployed in urban combat as it fits their weapon profile.

Mortar cycle can be assembled in a barracks, but requires a war factory to supply parts and ammunition. The barracks alone is only able to produce and not repair Mortar Cycle. Mortar Cycle is not an amphibious vehicle but is air transportable.

Mortar cycle can support mass infantry attack by building clearing and pounding guard structure from afar before mass of infantry arrive. Direct engagement with heavy armour is not recommended as they mount only whimsical armour, being a motorcycle. This deficiency also make them targetable by infantry weapon. But Spy's sniper or Shinobi's shuriken is not one shot effective against them (Natasha skill is on different case). The driver and the gunner is suppplied with basic survival kit that include gas mask, enhancing their survivability against chemical weapon.

Battlefield reconnaissance has revealed at least these facts about the Mortar Cycle:

• The Molotov flurry -- Though the mortar cycle takes its name from its heaviest weapon, Soviet sidecar gunners tend to favor using Molotov cocktails for hit-and-run attacks, since this allows them to fight without slowing down. These men seem well-trained at flinging the incendiary bottles while moving, and are clearly more skilled with Molotovs than the typical Soviet conscript.

• The porta-mortar -- The mortar cycle's strongest and longest-range weapon requires the vehicle to come to a halt, at which point it can begin lobbing explosive shells with great accuracy. These are all too effective at punching through stationary defenses, though the mortar cycle crews need to make the first shots count.

• Furiously fast -- Perhaps the most dangerous aspect of the mortar cycle is its top speed. In the hands of a capable driver, a mortar cycle can literally drive circles around enemy forces. Supposedly, in order to practice handling their vehicles at high top speeds (and to lift the spirits of their comrades), mortar cycle drivers often conduct race against Soviet terror drones to see who's fastest.

• Fresh from the barracks -- Mortar cycles are the only vehicle small enough to be assembled and maintained in a standard Soviet military barracks. However, a Soviet war factory still must be present in the area in order to provide surplus parts, fuel, and munitions. 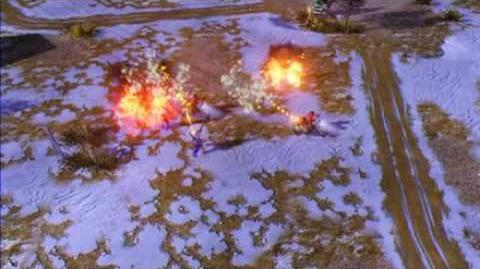 Retrieved from "https://cnc.fandom.com/wiki/Mortar_cycle?oldid=237617"
Community content is available under CC-BY-SA unless otherwise noted.