Mose "Wild Dog" Akinjide is a GLA general who is expected to appear in Command & Conquer (Generals 2). He is very resourceful and uses the upgraded Marauder tank.

Mose Akinjide was literally born into conflict, snatched as a newborn from his mother's arms during a bloody Janjaweed raid on his home. Sold on as a toddler to a violently anarchistic rebel 'army' by the age of six, he was scavenging battlefield corpses for his resource starved masters. Five years later, he was a fully-fledged child soldier, wielding his AK-47 with more manic enthusiasm than accuracy. His fearlessness and brutality quickly became legendary and in time he came to lead the wild group he had once been enslaved by. As the GLA started to expand their African presence, they reached out to Akinjide. Mose integrated his group into the GLA and has since lead a series of horrifically violent raids against those deemed worthy targets. The 'Wild Dog' of Sudan remains one of the most feared GLA operatives in the region. 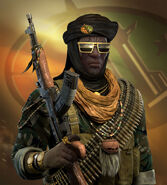 Retrieved from "https://cnc.fandom.com/wiki/Mose_Akinjide?oldid=215510"
Community content is available under CC-BY-SA unless otherwise noted.