Marauders are towering humans who have suffered extensive Tiberium mutation. They are typically about eight feet or two and a half meters tall and have physical endurance far beyond that of normal humans, and tend to be much more aggressive than the average mutant. Their muscular and skeletal systems are much denser, giving them superhuman strength.

They are some of the most powerful members of the Forgotten, whose strength and resilience make them ideal for defending mutant settlements from any and all hostiles, even other mutants. Most are extremely aggressive toward anyone not affiliated with them or their particular group, but some have been known to strike up deals with outside parties, most notably GDI and Nod, trading their services for supplies.

In the decade prior to the Scrin's arrival in 2048, Tiberium underwent another evolution that changed its properties. Those affected by it were subject to dramatic physiological alterations, many of them becoming bigger, stronger and more resilient. Among the physical changes were greater muscular and skeletal density, which made them much stronger and able to weild heavy weapons with ease, and thicker skin, which made them more resistant to physical harm. Among the mental changes were dramatically increased aggression and hostility toward anyone not affiliated with their own group.

Being so heavily mutated, they could survive in the most desolate of Yellow Zones and even in some of the Red Zones, where they had relative safety from intruders and a place to rally their forces. Most kept to themselves and were rarely seen outside their hideouts; some of them, however, did venture into the more habitable areas of the Yellow Zones and were sometimes seen on the fringes of Blue Zones, hiring themselves out as mercenaries to GDI and Nod in exchange for supplies. By the end of the Third Tiberium War, the Red Zones had become too hostile for even them to survive there, and they were gradually forced into the Blue Zones and overpopulated Yellow Zones as Tiberium underwent several major evolutionary changes.

Mutant marauders are special infantry units that only become available via the capture of a Mutant Hovel and are tougher than the basic infantry of playable factions. They are trained in squads of six and each marauder is armed with a minigun, making them lethal to both infantry and aircraft; they become particularly deadly when garrisoned inside an APC or structure and coupled with rocket-armed units. However, they are just as vulnerable to snipers and anti-infantry defenses, and they can't gain veterancy like standard infantry units, although picking up a Veterancy crate will slightly increase their hitpoints, which is indicated by their health bars turning orange. In Kane's Wrath, mutant marauders are seen to gain veterancy like other units, but only be seen by selecting them. 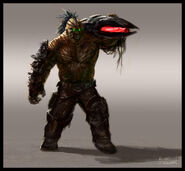 In Kane's Wrath, the rank as seen only o n the UI.
Add an image to this gallery 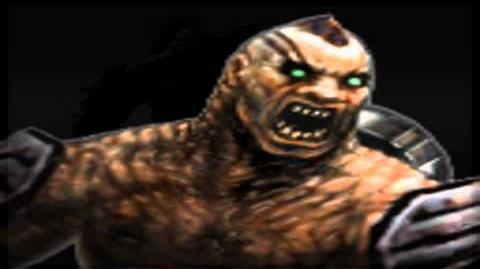