Functions much like the Mutant Hovel during the Third Tiberium War.[1]

Forgotten Hovels are roughly cylindrical buildings which are equipped much like ConYards and War factories, serving as a headquarters for local Forgotten members as well as a center of production. It is unknown if they're related to previous GDI habitation modules as the Mutant Hovel was build from, but these Forgotten Hovels were designed to serve as multi-purpose construction, equipped at the very least with the needed materials to assemble Ironbacks and the Scrapbuses as well as tame, arm, and house Visceriods. It is unknown if these are also used to house actual members of the Forgotten, but they've only been sighted in places where there were other shanty-houses and run-down housing, preventing positive identification of their purpose besides as an intermediary between non-Forgotten.

Both GDI and Nod have sent representatives to these Hovels to recruit the Forgotten to their side; however, the Forgotten seem to only deal with the side that has control, and indicates that either loyalty is fickle now, or that they are actually mercenary hubs.

In game, both GDI and Nod can use them to recruit Visceroids, Ironbacks, and Scrap Buses to their respective factions, so long as they can maintain control over the Hovel by having more units within the capture radius than their enemy until the Hovel switches to their side's control.

They are found in the missions "Transport Down" for GDI, and "Bleed Out" for Nod. Several skirmish maps also sport these neutral structures, typically in a one-per-side manner in the proverbial back of the side's home area. 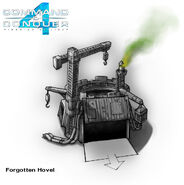 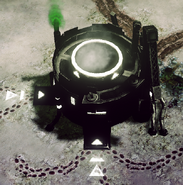 An inactive Mutant Hovel
Add an image to this gallery

Retrieved from "https://cnc.fandom.com/wiki/Mutant_hovel_(Tiberian_Twilight)?oldid=219325"
Community content is available under CC-BY-SA unless otherwise noted.