Naomi Shirada is an admiral of the Imperial Navy in Command & Conquer: Red Alert 3.

This gifted no-nonsense, fleet commander is the heiress to a famous military family's legacy and is widely known for her impatience for those who get in her way of her ambitions. It is said she has no permanent home, preferring life aboard the ships in the armadas at her disposal.

This cold-hearted, merciless admiral has spent her whole life at sea. In fact, she was born on a Shogun-class Battleship. Shirada is notoriously ruthless and uncontrollably violent, and even more so in battle. However, she is a very successful commander indeed, and a great asset to the Imperial Navy. The Shirada Shipworks, the center of Imperial naval activity in Tokyo Harbor, was named after her.

She made her first appearance in the Allied Campaign in the Battle of Gibraltar when the Allies and the Soviets were attempting to free their forces that were trapped there by the forces under General Kenji Tenzai's command. She then appeared on the scene, warning her enemies to leave while they still can. However, her fleets were quickly attacked by the newly recovered Assault Destroyers and Akula Submarines under the command of an unnamed but very talented Commander and the Soviet Commander Moskvin. She was later defeated defending a Floating Fortress in the North Sea. Shirada Docks was later destroyed by the Allied attack on Tokyo Harbour.

In the Soviet Campaign she was killed protecting Emperor Yoshiro on Mt. Fuji (see To Tame a Living God.)

Naomi did not see service during the Uprising. Her whereabouts during the conflict were never disclosed. It would appear, though, that Takara Sato took her place.

Shirada always feels at home when at sea, and a Commander fighting against her can expect to see excessive use of the mighty Shogun Battleships and Naginata Cruisers, as well as Sea Wings and Yari Submarines. A skilled/lucky commander who manages to overcome her naval attacks may try to outmaneuver her on land, but her forces are not helpless on land either. Always proceed with caution. 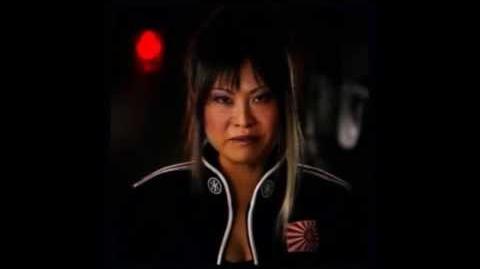 Naomi is portrayed by Lydia Look. Known for her small role of the Fu-Chow Restaurant waitress who temporarily wears Su-Yung's necklace in Rush Hour.

Retrieved from "https://cnc.fandom.com/wiki/Naomi_Shirada?oldid=219899"
Community content is available under CC-BY-SA unless otherwise noted.