Navy SEALs were elite special operations soldiers of the United States Navy and shared to all Allied nations' navies, in service during the first and second iterations of the Third World War.

In Red Alert 2, they are a campaign-only unit. They were introduced in skirmish/multiplayer in Yuri's Revenge, after Tanya began to differ from them in statistics and abilities.

Navy SEALs are able to kill any infantry with one burst of their submachine gun. If they can reach a building, their C4 charge will instantly destroy it. They are also competent swimmers, making their C4 charges a threat to ships as well.

They are helpless against vehicles and aircraft, however. They cannot get close to base defenses quickly enough to plant C4 charges before being killed, unless distracted by other units. Other powerful infantry units such as commandos, snipers, desolators, and all mind-control-capable units outrange them. In the water, the SEAL is especially vulnerable to submerged units, as he cannot plant C4 on them unless they surface.

For increased protection and mobility, a SEAL can be deployed inside an IFV. This will increase their speed greatly, as well as give protection against anti-infantry units. However, this also means that the SEAL cannot enter the water or perform demolition jobs until he exits the IFV. A SEAL IFV can destroy a terror drone with a single machine gun burst. 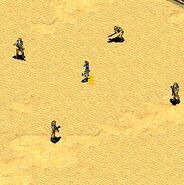 Retrieved from "https://cnc.fandom.com/wiki/Navy_SEAL_(Red_Alert_2)?oldid=237616"
Community content is available under CC-BY-SA unless otherwise noted.