The Nerve Center is a Scrin building that allows their Foremen access to the more advanced weapons in the Scrin arsenal, similar to the the GDI Command Post and the Nod Operations Center.

The Nerve Center unlocks the second tier of units and structures. It allows the production of the Devourer Tank and Corrupter from the Warp Sphere, and also allows construction of the Technology Assembler and Gravity Stabilizer from a Drone Platform or Foundry.

In addition, the structure allows the use of three support powers: The Swarm, Lightning Spike, and Tiberium vibration scan. In Kane's Wrath, two additional support powers, Ichor Seed and Infestation, are also made available after building the structure.

On one occasion, Nod captured one of these structures in order to gain the necessary codes for a Threshold tower. 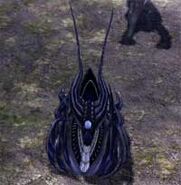 Retrieved from "https://cnc.fandom.com/wiki/Nerve_Center?oldid=214769"
Community content is available under CC-BY-SA unless otherwise noted.