A Briton with a massive frame (201 cm and 124 kg), Nigel Gunner Grant is the Dead 6 heavy weapons specialist: his primary weapon is a rocket launcher. He is an Afro-English born and raised in London's worst parts. He was seconded to GDI through the SBS (Special Boat Service), an equivalent to the US Navy SEALs[1].

Gunner appears in the singleplayer campaign as a supporting character in Deadly Reunion and All Brains, No Brawn .

In multiplayer, he is an advanced rocket infantryman, with his rocket launcher firing faster than the rocket soldier officer's. 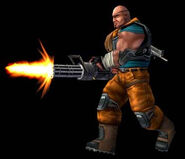 Icon with text
Add an image to this gallery

Retrieved from "https://cnc.fandom.com/wiki/Nigel_Grant?oldid=198310"
Community content is available under CC-BY-SA unless otherwise noted.