After the end of Second World War, the Allied forces decided that they needed a more versatile and powerful transport helicopter than the outdated CH-47 Chinook. To this end, they developed the Nighthawk, which served the Allies as an armed and armoured aerial transport for special forces, particularly Tanya and SEALs, as well as dignitaries, such as President Dugan.

The Allied Nighthawk Transport was designed to carry troops and spec-ops forces swiftly and safely from bases to an LZ, and also to evacuate Allied forces. To this end, Allied designers equipped the Nighthawk with radar baffling armour, making the unit undetectable by Soviet radar towers. Furthermore, the Nighthawk flies much more quietly than its predecessor. It is equipped with a nose mounted chaingun that was effective against infantry units. The Nighthawk possesses multiple hatches and a main rear hatch that allows it to quickly load and unload infantry.

Being the only air transport capable of being produced in the battlefield, it gave the Allies a huge advantage over its enemies. With the NightHawk, Allied commanders could send infantry swiftly to hard-to-reach areas, such as islands or areas surrounded by cliffs. On some battlefields, these are home to isolated but strategically useful outposts or Tech Buildings, so the NightHawk proved crucial to airlift engineers to capture these places. By contrast, Soviet and Yuri's commanders do not have this capability, so they must rely on ground transport to reach cliffed areas, which depending on the area may take much longer or may be outright impossible if the cliffs completely surround the place, or the Amphibious Transport to reach islands, which are slower and vulnerable to most enemy ships and submarines. Thus, clever Soviet and Yuri's commanders always looked for the opportunity to capture an Allied war factory so the could produce their own NightHawks. This helicopter is not seen in the wars after this one.

The Nighthawk Transport helicopter was used by Allied commanders as a method of quickly deploying special forces units wherever they were needed on the battlefield. It was especially common to deploy Tanya, squads of Navy SEALs or Engineers. As it is stealthed against radar, the Nighthawk can be used to transport units undetected through a gap in the anti-air defenses of an enemy base, then deliver them into the heart of the base.

The Nighthawk is vulnerable to all forms of anti-aircraft fire. Although it can not be detected via radar, the Nighthawk can still be detected visually by enemy base defenses. Lastly, its machine gun was not effective against tanks.

The NightHawk was not seen after the war against Yuri is over. 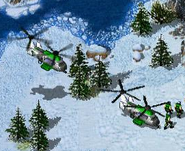 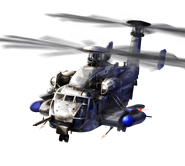 Retrieved from "https://cnc.fandom.com/wiki/NightHawk_Transport?oldid=240129"
Community content is available under CC-BY-SA unless otherwise noted.