To Tame a Living God

No Traitors Tomorrow was the sixth mission in the Soviet campaign of Command & Conquer: Red Alert 3.

With the arrival of the unnamed Soviet Commander to the front, the war against both the Allies and the upstart Empire had been going well. Thanks to the Commander's audacious tactics, the Imperial threat had thus far been stalled, while the Allied defense of Europe was swiftly collapsing. These victories did little to endear him to the veteran General Krukov, who was becoming increasingly jealous of his subordinate's successes and resentful at what he saw as Premier Cherdenko's favoritism towards the new Commander. Meanwhile, the Premier had barely just survived an attempt on his life, and promised to root out the traitor responsible.

All this came to head when the Soviets' best logistical officer, Comrade Dasha, reported that the faltering Allied war machine had essentially abandoned all of continental Europe and had pulled their remaining forces towards the Von Esling Airbase in Iceland. From this fortified position, the Allies hoped to halt the Soviet offensive and maintain a clear supply channel to the United States, as well as a staging area for Allied bomber attacks deep into Soviet territory.

In the worst case scenario, the Allies hoped to use the base as a rally point, where they could quickly evacuate their forces to Allied holdings in North America. Seeing nearly all of Europe within his grasp, Cherdenko ordered the Commander, his good friend Oleg Vodnik and the increasingly marginalized Krukov to eliminate this last bastion of Allied resistance in Europe. If the Allies fell here, then the Hammer and Sickle would fly from every flagpole in Europe, and the United States would find themselves facing a hostile and Soviet-controlled Europe across the Atlantic.

But even as the Commander got his marching orders, he received a strange, secret communication from the well-respected scientist, Zelinsky. Much of what the doctor had to say was made no sense: time travel, betrayal, altering the past and changing the future...one message stood out above all others: Beware of Cherdenko...

All three participants of this battle were largely dependent on naval and air forces to fight, given that the engagement took place on a series of small islands surrounding Iceland, as well as Iceland itself. This was especially true in the Allied case, where only a few companies worth of infantry and armour had been detailed to protect the vital airfields. For the most part, the numerous Allied aircraft that had fled to the Von Esling Airbase acted as their primary means of attack. These were supported by small detachments of the Allied Navy, though the ships present were some of the most powerful in their arsenal. The Allied forces had been hammered repeatedly by the Soviet onslaught, and those that had rallied in Iceland were worn-out and exhausted after weeks of constant fighting.

Both Soviet detachments, meanwhile, used a similar composition of units as the Allies; their forces were heavy in air and sea units, but largely deficient in terms of ground forces. Krukov was the possible exception to this, as his strikeforce possessed a fairly considerable armoured component. Both Soviet detachments were numerically strong, with many men and vehicles within each.

The Soviet detachment under the Commander and Oleg set up their base very quickly, hoping to gain the initiative against the already-wary Allies. Even as they launched their first attacks and as Allied and Soviet aircraft began a series of persistent dogfights over the cold waters of the North Sea, Krukov arrived with his own forces, setting up on an island further to the south, and "re-distributing" much in the way of resources allotted to the Commander. Ignoring this rather impolite gesture, the Soviets began striking the westernmost Allied defenses, clearing the seas of many Allied vessels before their Dreadnoughts began bombarding the Allied defenses, opening up a gap for the Soviet aircraft and ground forces to begin attacking the Airbase.

The Soviet invaders had just begun to trash the western Airfields when the Commander received a disturbing message from the Premier: Krukov was the mastermind behind the assassination attempt on Cherdenko, and was hoping to seize control of the Union for his own selfish interests. Infuriated by this treachery and inflamed by the hostility already between them, the Commander immediately began diverting his forces away from attacking the Allies, sending them against Krukov's own forces. The commander was even authorized to deploy his Kirov airships to bomb the traitors base.

Just as they had experienced so many times in the past, betrayal and internal dissension tore the Soviet forces apart. Initially stunned by this sudden change of events, and pleading his innocence, Krukov soon gave into the temptation and retaliated against the Soviet loyalists with equal fervor. Such was the ferocity of the battle that the Allies were given a brief respite to regroup and counterattack, much to Giles' delight. The delay also gave him the opportunity to unveil his Proton Collider superweapon, hoping to blast the attacking Soviets into oblivion.

Realizing the danger of fighting two superweapon-armed foes at once, the Soviet loyalists undertook a desperate, if effective, tactic. Ignoring the heavy fortifications and massive number of troops defending Krukov's base, the Commander aimed infantry with bullfrogs straight for the heart, annihilating Krukov's Command Bunker with Flak troopers and Magnetic mines, thus killing the traitorous General.

With this, Krukov's forces quickly switched sides, desperate to avoid the fate that the Soviet secret police would dole out if they refused. With their combined strength, the Soviets quickly overran the Von Esling Airbase, even taking down the Proton Collider before it had a chance to fire. Buckling under the weight of the onslaught, the Allied defenses soon crumbled, as did Commander Giles. What operational planes remained fled for the United States, as their aerodromes were shelled to ruins by the victorious attackers.

The destruction of the Von Esling Airbase had sounded the death knell for the Allied Nations in Europe, and whatever forces managed to survive the retreat quickly fled to the United States, now the last genuine bastion of Allied resistance against the Soviet Union. With this victory, all of Europe now groaned under the Soviet Union, and would not be liberated for the rest of the war. Krukov's death meant that one of the greatest threats to Cherdenko's power was eliminated, and the Commander received the rank of General in thanks.

Afterwards, the Soviet Union would shift its attention to eliminating the enemy that had nearly broken them: the Empire of the Rising Sun. The Soviets launched a daring attack on Mt. Fuji.

The player will get tons of credits so spend them all quickly because Krukov will appear and take the cash away.

Build Dreadnoughts and air power with Natasha. Once Krukov is revealed to be the traitor the player gets the new Kirov airship bomber to destroy Krukovs VIP bunker and Conyard.

After the traitor is dealt with destroy the Proton Collider and the rest of the Allied bases to complete the mission.

A shortcut to victory is to set ambush around Krukov's critical structures when he is still considered an ally. 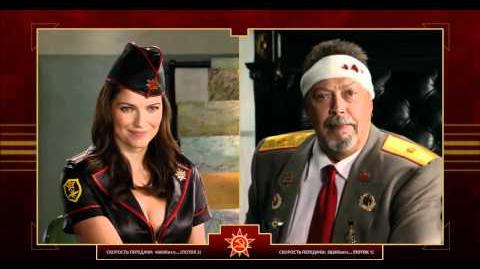