Inspired by the pyramids of ancient Egypt, the Brotherhood of Nod leaders decided to construct massive pyramids as their command centers. Fitted with the latest in communications and battle command interfaces, these structures also allowed for high quality living quarters for commanders and officers and sizable barracks for regular troopers to be installed, not to mention armories and other necessary facilities. The exterior shell is made out of concrete and reinforced armored plating, allowing it to withstand immense punishment.The main pyramid in Cairo, which served as Kane's command center, was equipped with a massive missile silo in its center, housing the World Altering Missile under a retractable tip of the pyramid.

General Vega's command post was located within an old pre-Columbian pyramid, reflecting Nod's symbolism of the era. The traitor Hassan also created his own Nod Pyramid in Cairo. It was destroyed along with the rest of Hassan's forces.

Despite their advantages, after the Second Tiberium War, Nod decided to use different command centers such as the traditional Temple of Nod and Temple Prime. The Pyramid was not wholly abandoned, as Nod used the design for the Redeemer Engineering facility. 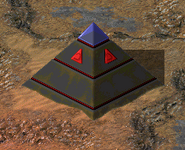 Kane Pyramid with its top open
Add an image to this gallery
Retrieved from "https://cnc.fandom.com/wiki/Nod_Pyramid?oldid=205436"
Community content is available under CC-BY-SA unless otherwise noted.