The armoured personnel carrier (or APC) was a wheeled troop carrier used by Nod in Renegade.

This six-wheel vehicle has thick armour plating and a large passenger compartment. Armed with a machine gun, it can repel most infantry and light armour threats.

This APC only appears in Renegade. In Tiberian Dawn, Nod does not use the APC with the exception of some campaign missions where Nod uses captured M113 APCs.

It is useful for rushing enemy bases, as its heavy armour will allow it to at least survive a few anti-tank weaponry strikes. 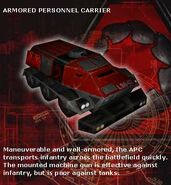 In the Renegade database
Add an image to this gallery

Retrieved from "https://cnc.fandom.com/wiki/Nod_armoured_personnel_carrier_(Renegade)?oldid=217557"
Community content is available under CC-BY-SA unless otherwise noted.