The nuclear missile silo was a Soviet superweapon deployed during Third World War and its second iteration.

The nuclear silo was a large linear enclosed structure similar to a tall hanger that was heavily-armored, and intended to construct, prepare, and launch tactical nuclear missile. If the missile launched, any and all hostiles in the nuclear missile's ground zero blast zone immediately felt the devastating horrors of nuclear weaponry. It saw service with the Soviets during Third World War. They were designed to be armored heavily enough to withstand a direct nuclear weapon hit on their own position, and still be able to fire their own nuclear weapons. The design was a much more improved version of the old Missile Silo.

Before the Third World War the United States built several nuclear silos, modelled after old Second World War design, including one facility with at least three operational silos known to contain at least 10 nuclear missiles as deterrence against a full-scale attack. However, when the time came to use it, nuclear retaliation failed due to Soviet sabotage of the presidential authorization line to the silos by the psychic Yuri. Yuri used the line to mind control the operators, having them launch the missiles but leave the silo doors closed, effectively declawing the Allied forces a chance to give the Union a taste of their own medicine.

However, the Soviets had many smaller Silos that they deployed on many occasions.

Its most notable use during the war was in the nuclear attack that destroyed Chicago entirely using a Nuclear Fusion warhead, as opposed to the typical fission warheads. The fusion warheads had explosive power in the megatons, as opposed to the fission warhead's kilotons. The explosion toppled the city's vast skyline and its signature Sears Tower; cars were swept by the shockwave like sticks in a tornado, structures either collapsed, incinerated, or were sent flying off their foundations, and people were nothing more than their permanently etched shadows on the walls. However, fusion missiles generate much less radiation, thus Chicago was not a total loss. Still, the Commander's forces who had just succeeded in destroying the Psychic Amplifier were crushed in the attack.

The Soviet Union also deployed a pair of nuclear silos on the German-Polish border which housed medium-range ballistic missiles as a means of blackmail against Western Europe, threatening to annihilate their cities if they attempted to lend any assistance to their American allies. Shocked and shaken by the destruction of Chicago, the Europeans agreed to assist the Americans, but only after they destroyed the nuclear silos threatening their cities. The Americans deployed Agent Tanya behind enemy lines to destroy the silos, and eventually succeeded in destroying both silos. With the Soviet Union's means of nuclear blackmail ruined, the Europeans declared open war on the Soviets and rushed to America's aid.

A trio of nuclear silos based in Soviet Cuba was also used against the Allied base in the Florida Keys while they were developing the Chronosphere. Premier Romanov was sure these missiles would spell doom for the Commander, but to his outrage, the Commander proved defiant and demolished the Soviet base and its silos, ensuring the safety of the Chronosphere and the Allies' ultimate victory in Moscow.

The Soviets maintained a single nuclear silo within Moscow during the Allied assault on the city. The Soviets were prepared to nuke their own capital in the event of an Allied invasion, but the Americans ultimately destroyed the silo and overran Romanov's defenses around the Kremlin. Thus, not even the Union's vast nuclear arsenal could save it from total defeat. 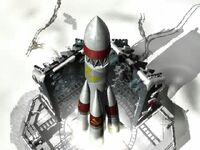 Soviet nuclear launch on the Chronosphere.

The commander gained the nuclear command codes from the Soviet command for use against the Allies' "strange" superweapon, the Weather Control Device.

It proved to be a major factor in Red Revolution as Yuri was forced to throw anything he had at the silo (Yuri likely did not have nuclear command codes and used the Iron Curtain instead). However, the Commander used them to purify the Kremlin from Yuri.

It was later used to destroy the last fully operational Chronosphere in Alaska, securing total victory over the Allies.

During the Psychic Dominator Disaster, Yuri seized one of the Soviet nuclear missile silos and threatened Seattle in an effort to force Chairman Bing, CEO of Massivesoft, to fund his operations.

Due to the erasure of Albert Einstein at the hands of Anatoly Cherdenko, and the fact that Einstein was partly responsible for nuclear technology, the Nuclear Silo no longer exists, paving the way for the new Vacuum Imploder.

The Soviet nuclear missile that can be launched from this Silo looks practically identical to the real-life R-7 "Semyorka" (NATO reporting name SS-6 Sapwood) missile developed in the 1950s by the Soviet Union. It was the world's first intercontinental ballistic missile ever built. Its modified form launched Sputnik 1, the first artificial satellite, into orbit.