The missile design bears resemblance to the SS-25 Sickle ICBM used by the former Soviet Union. It appears to be a 3-stage missile, and it carries a single warhead. The missile is seen in entirety during launch, but only the warhead descends to the target - a more realistic representation of how ICBMs work in the real world.

The warhead takes 7 game seconds to reach its target.

It is worth noting that a Decoy Temple of Nod will have its own timer for the nuclear missile strike as if it were a real one, in order to confuse the enemy. 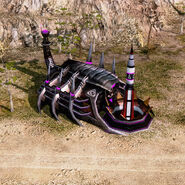 Temple of Nod with Nuclear Missile 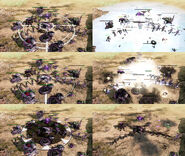 Nuclear strike on Scrin base.<nowiki>
Add an image to this gallery
Retrieved from "https://cnc.fandom.com/wiki/Nuclear_missile_strike?oldid=214560"
Community content is available under CC-BY-SA unless otherwise noted.