Fires a Nod Nuclear Missile at its current location. (effectively an instant-kill on anything affected)

The Retribution nuclear strike beacon is a communications device that guides nuclear missiles to their target.

When deployed, it emits an ULF (ultra low frequency) triple encoded burst signal[1], allowing for Nod tactical ballistic nuclear missiles to accurately home in on its position without GPS aid, launched from the Temple of Nod or the Shrine of Nod. Once deployed the unassuming beacon transmits its signal via an ultra-low frequency, triple-encrypted radio wave. This signal is received, deciphered and fed into any Nod command console found within range. The command console in turn initiates the firing sequence by running a final authentication, determining missile launch destination and releasing the safeties. Impact typically comes in 2–3 minutes, the result being a nuclear explosion that lays waste to any object within 10 miles.[2]

It was Nod's response to the GS-2 Godsend ion cannon beacon mass destruction device developed by GDI. Nod used advanced optical technology on its nuclear missiles that would make the skies appear to be red, giving GDI personnel in the vicinity a (usually futile) last chance of escape. This modified the weather much like the GDI Ion Strike did.

There was however, one major weakness to the function of the beacon. Because the user didn't have to manually relay target information to Nod Missile Command, the device could easily be hijacked by GDI soldiers in the field and used against Nod personel. The Retribution missile targeting electronics could only be stopped using a special engineering tool.

The beacon appears in Renegade only, as Nod's ultimate building destroyer. It costs 1000 credits in multiplayer and will destroy any building if the warhead successfully explodes. It's use is extremely hard, though - setting up the beacon takes 5 seconds while the warhead travels 48 seconds to the target, during which it can be easily disarmed by engineers and Hotwire. Often, it's best to sneak into the base accompanied by a sizeable friendly strike force and deploy it in an easily defensible spot.

On certain maps, it is possible to deploy it in a tunnel and destroy a structure that way. However, this practice is frowned upon and many servers automatically ban for tunnel beaconing. 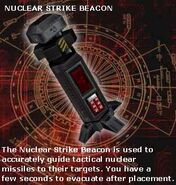 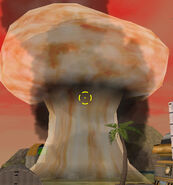 Retrieved from "https://cnc.fandom.com/wiki/Nuclear_strike_beacon?oldid=191206"
Community content is available under CC-BY-SA unless otherwise noted.