An Obelisk of Light is the most powerful base defense of the First Tiberium War. It features in Renegade as the primary multiplayer defensive structure for Nod.

Born out of the need for a powerful defensive mechanism for Brotherhood military bases, the Obelisk is quite possibly the most powerful laser weapon in recorded history, result of Project Obelisk WDTA2411 5[1]. It's mode of operation remains basically the same throughout the wars - massive capacitors underneath the structure amass power, which is then used to create a powerful laser beam, directed against enemies via a system of advanced optical and focusing systems. Obviously, it requires massive amounts of power to function. In Tiberian Dawn, the Obelisk of Light is a sloped back obelisk that ends in a large focusing crystal that projects the laser. It's under complete computer control, with humans only needed to oversee that it works properly.

An interesting offshot of Nod research was the development of portable Obelisk modules, codenamed Firefly and Tarantula respectively, which utilized a similar technology, though much less powerful. These weapons never made it outside limited field testing and did not have a major effect on the resolution of the conflict.

The massive tower of doom consists of 3 combined segments that form the tail of a scorpion. The surface building is a heavy, resistant structure that only houses the final focusing crystal and the cables that are used to transmit the focused light from the basement capacitors. Inside, there is only a status terminal and an elevator leading down.

The first sublevel is a maintenance catwalk, located right underneath where the main light transfer cables meet and go to the surface. On the opposite ends lies the other elevator, which leads to the base of the structure and the main capacitors.

Arranged in a semicircle, the basement contains the main laser capacitors for the entire base. Light that is being amplified and focused can be seen through viewports everywhere (all of which are shaped like a chamfered triangle, much like the emblem of the Brotherhood). The MCT is accessible in a small room to the left, when exiting the elevator.

The C&C mode Obelisk is a simplified, scaled down version. It inflicts a considerable amount of 300 damage points per beam and the MCT is located on ground level, opposite the entrance.

It is deadly against individual units foolish enough to attack it without support, but the structure fares poorly against divisions of armor unless protected. Unlike all its other counterparts it can fire on aircraft. 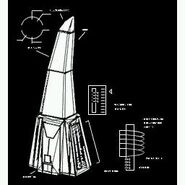 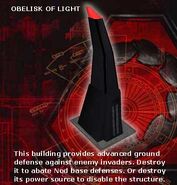 Retrieved from "https://cnc.fandom.com/wiki/Obelisk_of_Light_(Renegade)?oldid=177259"
Community content is available under CC-BY-SA unless otherwise noted.