The "Isis" Obelisk of Light [1] is a powerful defensive structure used by Nod in the Third Tiberium War.

The terrifying power of this heavy defensive structure is a shining testament to Nod's military application of laser technology. The Obelisk's basic design is largely unchanged since its introduction in the First Tiberium War, with the only obvious differences being a longer charge time and a more powerful discharge.

First constructed to defend Nod bases during the First Tiberium War, this iconic structure is one of the best known and least loved among GDI forces. Massive capacitors charge and discharge a laser - which is aimed by advanced focusing and targeting systems - that can melt composite armor to molten slag and vaporize organic tissue.

Nod Beam Cannons, sharing the similar technology on these towers, can use their ability to fire at these towers, this improves charge frequency and damage up to the point where the Obelisks become practically immobile, very high damage artillery emplacements with higher precision, damage, and range than any other base defense structure.

The Obelisk of Light is the top tier base defense for Nod. Groups of Obelisks of Light are very hazardous to any ground unit within their long range, even Epic Units. They cannot attack aircraft. Having a beam cannon assist an obelisk will give it a firepower and firerate boost, generally more useful than if the cannon were to attack separately alongside the obelisk.

Unlike other base defenses, this tower has two modes of attack:

When engaging vehicles, the tower will charge and then fire a strong beam to deal damage to a single enemy unit. This is often enough to destroy light and medium vehicles in a single hit. It is probably the most powerful and cost effective base defense in a 1-on-1 fight with an enemy vehicle, overall.

For infantry, it will not charge at all. Instead it will fire a briefly sustained beam that sweeps enemy squads horizontally, making it prone to killing multiple soldiers at once. This is presumably to help with balance, as Tiberium Wars is the first game in the franchise where infantry are usually constructed as squads, instead of as individual soldiers.

Power consumption is very high, and due to its low firerate it may be useful to supplement an obelisk with lower tier ground defenses which fire more rapidly. 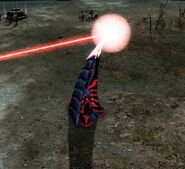 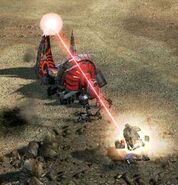 An Obelisk of Light destroying an enemy GDI vehicle

Obelisks fending off a Scrin attack 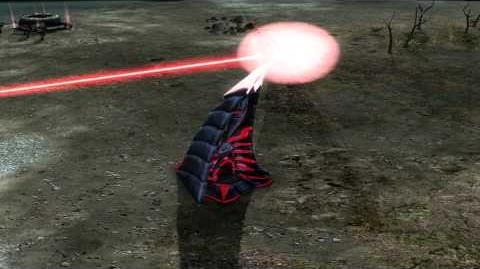 Retrieved from "https://cnc.fandom.com/wiki/Obelisk_of_Light_(Tiberium_Wars)?oldid=220767"
Community content is available under CC-BY-SA unless otherwise noted.